The road to becoming an elite athlete takes a lot of hard work, dedication, and often times, a dose of inspiration. Read below about the individuals who inspired these athletes to pursue their dream of competing against the best in the world. 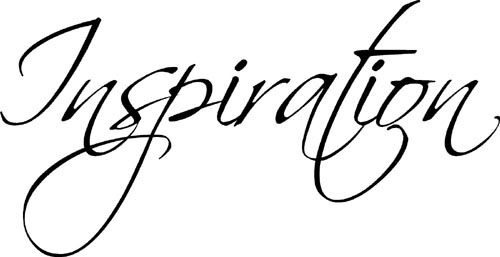 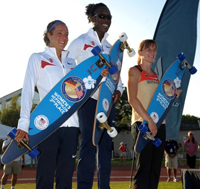 Ryann Krais (Heptathlon): I have been fortunate to witness or compete with quite a few talented athletes who are all-around good people. The athlete that has left the greatest impression on me in numerous realms of life would be Bettie Wade. I trained alongside Bettie for 3 years and have been inspired by her faith and outlook on life.  Bettie competed intensely while also being able to share joy with her competitors.

As a training partner, Bettie helped my re-evaluate my values during times of frustration. I distinctly remember her asking one time, “If you were never to reach any of your track goals, if you never made an Olympic team, would you be able to look back and say that all the time you spent out here was worth it?” I still use that as a check for myself. Bettie is genuine and real. She wanted the best for her competitors and wanted the best for herself simultaneously. She also practices what she preaches. In her own times of frustration, she left it in God’s hands. Although Bettie always aimed to score high, her ultimate mission was to let God use her in whatever way. Bettie set a great example of how to be a good person on and off the track.

Heather Wilson (1500m): I realize that there are numerous running icons of the past that could easily serve as an inspiration for my running habit.  Honestly though, the first phrase that pops into my head when anyone brings up running is the classic ‘run, Forrest, run’.

And while Forrest Gump may be a fictional character, and not the sharpest crayon in the box, I would love to accompany him on a run.  For starters, it would finally be appropriate for those clever bystanders to shout the ‘run, Forrest, run’ phrase as we passed.  Besides with any luck I may even get a million dollar idea out of the run like the ‘**it happens’ bumper sticker or the smiley face t-shirt.

More importantly, I would enjoy running and conversing with Forrest because he truly understood the urge of just feeling like going for a run.  He knew people around him thought he was a kook and irrational for all the miles he logged, and yet he ran regardless.  He recognized, even if it was subconsciously, that a run can clear the mind, it can erase a bad day, it can lead to an epiphany, but most importantly he realized that if you have a passion for it you do not need a reason to lace up your trainers and hit the ground running.  I would, however, have one small stipulation.  I think we would just keep the run to an hour or so instead of three years, two months, fourteen days, and sixteen hours if that’s okay with him.

Jeff Porter (110m Hurdles): My biggest inspiration comes from my parents, my father the late John I. Porter and my mother Linda Porter.

My father was my biggest fan and the person got initially got me started in the sport.  Because of my long legs, he believed that I could be a hurdler.  At the time, I wasn’t into running but his belief sparked my interest.  At the time, my mother was battling breast cancer.  During this time, as sick as she was, she continued going to school to earn her second master’s degree.  If my mother was going to work every day, managing radiation and chemotherapy treatment, raising a family and finishing her second master’s degree, I had no excuse for not achieving my dreams.  Years later in 2007 my father was diagnosed with Stage 4 lung cancer (although he was not a smoker).  Regardless of his terminal condition, he continued to work, travel and support my dreams of making the United States Olympic Team.  My trials on the track were nothing compared to the battle for his life.  My father wanted me to succeed and did any and everything he could to make my dreams a reality.  Long after he passed, along with the support of my mother, his memory continues to be my driving force to achieve success.

Cydney Ross (800m): My coach Frank Gagliano, or Gags as we affectionately refer to him, has been my biggest source of inspiration this year. At 77 years old, he continues to arrive to practice sprightly and with more jokes and inspiration than most of us are prepared to handle at our early morning practices. Gags represents everything the sport track and field should stand for; rooted in teamwork, a little risky but always honest. Gags took a chance on me when almost no one else would and the club is allowing me to chase my dreams and for that I am forever grateful.

Miranda Melville (Walks): Inspiration is not something that can easily be found at times. As an athlete inspiration can come in many different forms. Sometimes you need the inspiration to just relax and be calm with training and indulging in life.  When receiving the task to write about a particular athlete that has motivated me to become the athlete I am today, well I felt a bit stuck. I never had a big name athlete that I followed. Perhaps that is a bit weird, so I took the time to reflect on whom around me keeps me enthusiastic about training and competing. After much thought, I realized the athletes who inspired me most are the ones I have surrounded myself with everyday. 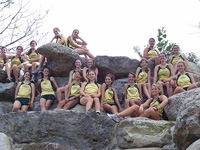 Starting in high school, it did not matter what grade, the girls I ran with every day kept me motivated on and off the track. Being on a team you make connections that can last a lifetime. Whether the girls were hurting from shin splints, or feeling overwhelmed by homework, we were all there for one another. The basic of camaraderie on the track started there.  These girls were the ones going to state championships, they were the ones winning the meets, and I wanted to be like them. I wanted to be successful like them. As upperclassmen were going on to run in college and get scholarships, I became motivated to want to do the same.

Jamie Cheever (Steeplechase): I would have loved to see Doris Heritage, an American trailblazer for women's running, compete on the track.  Doris started competitive running in the 1960s, before Title IX was passed to give women access to school sponsored athletics.  She competed in five world championships and two Olympic Games in spite of fierce sexism and resistance to her training.  Doris was pushed into Green Lake in Seatless while working out and her coach received death threats.  Doris has given back to the running community through coaching and teaching at Seattle Pacific University over the past 30 years.  I am inspired by Doris' talent, perseverance, and commitment.

Amanda Smock (Triple Jump): A source of inspiration: Robin Roberts. I admire her character, good will and positive outlook on life. My favorite line of hers is "make your mess your message". Robin has faced incredible challenges in her life yet she chooses happiness. I greatly appreciate her acknowledging that everybody's got something that they are facing in their lives, "but we've also all got something to give; hope, encouragement a life-saving transplant or a spirit-saving embrace." Life is truly what you make it and I love seeing what Robin Roberts has made of her life even in the face of many challenging circumstances.

In great thanks to those girls from high school, I went on to compete and be part of a new team throughout college. Although the faces may have changed, the growth of new relationships did not. Again, an assortment of extremely dedicated and strong women surrounded me.

There were many days where we may have wanted to quit, and no matter what decision was made, we always knew we had the support of one another.  The experiences of being with my college teammates are some of the best of my life so far.

My post collegiate days brought me to a new level of competition, and a new level of inspiration. My teammates and training partners always keep me focused and helped create an even stronger athlete within myself.  My current teammates have been there for me at some of my weakest moments, and have continued to fill my life with great memories of adventures together all over the world.  From some of my worst races to some of my best, the group of friends I have to train and talk with now, have aided me in keeping a level head. 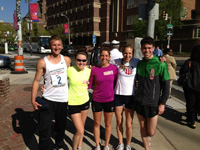 I may not of always been there to see my teammates compete at every competition over the years, but their words, wisdom, and joyful memories are with me every time I am competing.  Whether it is a good or bad day, my true inspiration are just the people, who I meet every day, that are going through all the different trials of life and are still following there athletic dreams. They give me the courage and hope to keep pursuing mine.