Does this describe you?: "I love the sport but it's too damn hard to follow." Maybe this brief regular column by AthleteBiz Board Member, Steve Fillebrown is your answer.
posted February 20, 2015

Great weekend to be a miler, or a fan of the event. One reporter stated that there were 36 (!) sub-four minute miles on Saturday. We chronicle just a few of them below. Though a four-minute mile is more common than it used to be - this weekend your odds of seeing a sub-four were greater than seeing a male in a 50 Shades movie theater - it still has a certain magic.

In NYC, Matt Centrowitz held off a spirited challenge from Nick Willis in the last 150 meters to capture the marquee event of the weekend, the Wanamaker Mile at the Millrose Games. Centrowitz clocked a world-leading 3:51.35 and was followed by nine others under 3:58; one of those "others" was 40 year-old Bernard Lagat who smashed Eamonn Coghlan's masters record by over three seconds. The women's race wasn't close, as Shannon Rowbury powered away from the field and had a big enough lead to survive some stumbles down the home stretch - "my legs just disappeared." ABer Heather Kampf ran a solid race, posting a 4:30.07 PR in 6th. 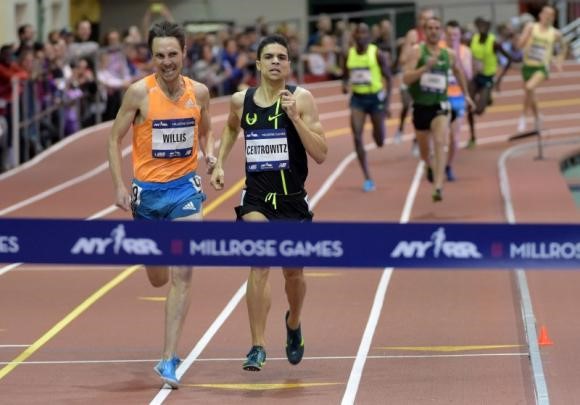 Quality miling was not the sole property of New York.  At Boston University's David Hemery Valentine Invitational, ABer Rachel Schneider ran a strong 4:30.62 to place second behind Colleen Quigley's 4:29.67; both benefited from fine pacing work by ABer Amanda Winslow-Rego.  The men's race added another seven to the day's sub-four total, led by NJ/NYTC's Ford Palmer at 3:56.79.

ABer Heather Wilson won the Iowa State Classic in 4:33.75.  Can't leave out a tip of the hat to ABer Lyndsay Harper who did pace work in both the mile and the 800 meters, then anchored a team in the 4 x 400; what, no field events? The men's race saw another eight runners dip under four minutes, led by Matt Elliott's 3:57.36.  To round out our mile coverage, we go to Seattle as there were six under four at the Husky Invitational, with Montana State's Cristian Soratos leading the way at 3:55.27.

Plenty of good action at the Millrose Games besides the mile. Erik Sowinski might as well call the Armory his home track despite his midwestern roots. He's already had some good moments at this venue, like setting the AR in the 600 and running the 800 leg on the WR DMR team. Saturday he added another good memory, winning the 1000 m in a tight race over Robby Andrews.  Erik responded well to Andrews' surge on the final backstretch, getting to the turn with his lead intact.

"It feels great to once again win at The Armory. It's where my track and field career really got started. I feel like I almost have a home field advantage when I compete here. I'm a little disappointed the race wasn't faster, but I'm happy with the win." - watch the full interview here

In the men's 5k, ABer Ryan Hill ended up as the default pace setter for most of the second half of the race. Once the kicking started he fell off a bit, then rallied well to challenge Lopez Lomong for the win; he finished just .2 behind Lomong's 13:27.60. ABer Donn Cabral ran a consistent race, keeping himself in the pack and was rewarded with a fine 13:28.64 and fourth place.

Looking at some of the shorter races, ABer Jeff Porter was 5th in the 60 HH and wisely did not follow Ashton Eaton over the padded wall. And in the women's 400m, newly inked ABer Sanya Richards-Ross took on Phyllis Francis, both collegiate indoor record holders. On this day, Francis had a little more, edging out the veteran 53:14 to 53:77. Afterwards Richards-Ross said "I feel I didn't tweak my training enough for the indoor track. The crowd here at The Armory, the energy and music were great, but ultimately my legs felt heavy at the end."

We'll finish with the pole vault. ABer Mary Saxer continued her consistent vaulting with another 4.50m (14'9") to take second behind Ekaterina Stefanidi at the Millrose Games. And out in Kansas at the Herm Wilson Invitational, Jack Whitt cleared 5.67m.

5.67m or 18'7ft from today. Finally coming around. I got a lot more in the tank. Got a little anxious at the bar but it stayed so I'm happy. #polevault #polevaulting #nike

Many athletes are heading to England for events this weekend but will be back the following weekend for the US Indoor Nationals.