Does this describe you?: "I love the sport but it's too damn hard to follow." Maybe this brief regular column by AthleteBiz Board Member, Steve Fillebrown is your answer.
posted February 12, 2015

Fewer venues this past weekend but plenty of great performances in Boulder and Boston.

Athletes at the USATF Cross Country Championships were tested by frigid balmy temperatures, snow squalls sunny skies and altitude (Boulder is still at 5,430 feet). In the women's race, Laura Thweatt used a series of surges to drop a large pack, then Brianne Nelson, and finally Sara Hall to win by over 30 seconds. Sara faded a bit but hung on for 5th place. After the race she tweeted:

Happy to make my 3rd World XC team, suffered hard to do it! Congrats to Laura,the only 1 who made altitude look easy! pic.twitter.com/HBirwfbbeT

Well cross country, 4k of that 8k was real fun! Misjudging effort at altitude is a risk when going with the leaders, and came back to get me today. Excited to celebrate with my beasts @briefelnagle and @angelabizzarri for their 4th and 7th place finishes!

Chris Derrick pulled away from the field late to score a 30 second win in the men's race.  Things were tight behind him though, as just 15 seconds separated 2nd through 6th.  Veteran Joseph Gray was 14th and found out later that this got him a place on the Pan Am team:

Got smacked with some good news after yesterday's Nationals for XC. I'll be representing Team USA at the Pan American Games! This will be my 18th time representing my country and I couldn't be more excited than when I made my first team years ago! One of my training partners is also going to be on the team so coach has done good work so far in 2015. Let's roll em up #teamUSA #Columbia here I come ✈✈✈✈🚀 @scottsports @scottrunning #Noshortcuts @beetelite @mioglobal

Later that same day, Boston's Reggie Lewis Center was the site of the New Balance Indoor Grand Prix.  The list of high level performances is long, as is the roster of ABers who competed.

In the women's distance medley relay, the New Balance-USA team found out that winning the damn race can be harder than setting a world record.  The foursome of Sarah Brown (ABer), Mahagony Jones, Megan Krumpoch, and Brenda Martinez (ABer) frequently trailed the NJ-NY All-stars and with a lap to go, Nicole Tully (nee' Schappert) appeared to have opened up an insurmountable lead.  But Martinez put the hammer down and made up the gap to eke out the win.  The picture, a classic contrast of the thrill of victory and the agony of defeat, shows how close it was.  Both teams easily broke the old record.  Interesting side note - Brown was the anchor for the previous record setting squad. 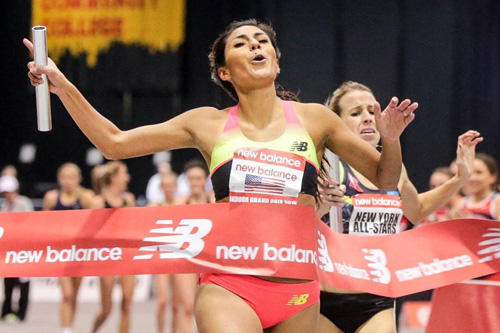 Speaking of DMR records, three-quarters of last week’s record setting team met in the men’s 1000m.  Matt Centrowitz looked smooth on the way to a 2:17.00, just .24 seconds off the American record.  He was followed in succession by Pat Casey and Erik Sowinski.

The men's mile was another quality race as Nick Willis set both a meet record and a New Zealand record (supplanting John Walker!) with his 3:51.61. ABer Riley Masters worked hard to keep contact with the front pack and was rewarded with a PR 3:56.15, chasing Ben Blankenship and Abdalaati Iguider all the way to the tape.

Will Leer ended up as the default pace setter for the second half of the men's 3k; he was passed at the end by a few but posted a respectable 7:48.80; Dejen Gebremeskel won and Bernard Lagat came away with second and a masters world record.

In women's two mile, Jenny Simpson followed pacemaker Heather Wilson for the first mile, then powered away on her own to an American Record of 9:18.35.  Heather tweeted:

So honored to play a small part in an American record for such a class act runner as @trackjenny... Congrats! #welldeserved #NBIGP

ABers Mary Saxer and Melissa Gergel continued to vault well as they took 1-2. Mary noted in her blog that she is "happy with my execution of things we have been really focusing on in training."

There were many college invitationals this weekend.  Let’s pick one meet and one event at random, say the men’s pole vault at the University of New Mexico Collegiate Classic.  Well look at this; in third place, with a vault of 5.61m or 18-04.75, is Brad Walker! Will be interested to see where this goes.

And finally, hard not to mention a 46.13 400. Patrick Feeney put that time up in finishing second to Brycen Spratling (45.90!) at the Meyo Invitational at Notre Dame.  He tweeted:

A lighter schedule this week but there is the grand daddy of indoor meets, the Millrose Games. The men's mile will deservedly get much of the attention (defending champion Will Leer will have his hands full) but other fields are deep as well so the viewing should be good.