Does this describe you?: "I love the sport but it's too damn hard to follow." Maybe this brief regular column by AthleteBiz Board Member, Steve Fillebrown is your answer.
posted February 5, 2015

The Armory Invitational got the national spotlight but there were plenty of other venues generating some good action. AB staff is exhausted after tracking down results from the Hilton Garden Innvitational (no typo - see what they did there!), the John Thomas Terrier Classic (Boston University), the Penn State National Invitational (University Park) and the UW Invitational (Seattle).

At the Armory, Cam Levins pulled off an impressive double, winning both the mile (3:54.74) and less than 30 minutes later, taking the deuce in 8:15.38. Jordan Hasay's 2M win looked well choreographed, like there was a specific plan and she followed it to the letter. But the big news was clearly the World Record in the DMR for Team USA.

Shoutout to @mgcentro @burberrybugatti @patkc13 for making this such an awesome weekend. Now time to make it back to Iowa before the snowstorm hits here! #NikeRunning #USA #WorldRecord

Matt Centrowitz got the team off to a great start with a 2:49.5 1200 and Mike Berry kept the team on pace with a 46.5 400 split. He handed off to ABer Erik Sowinski who put down a 1:47.6 800 split to keep the world record in jeopardy. Patrick Casey opened conservatively in his anchor leg, allowing Ireland back in the race, but his strategy paid off and the 3:56.5 anchor brought the team home in 9:19.92, well ahead of the old record of 9:25.97. Afterwards, Sowinski told RaceWeeklyResults Chris Lotsbom, "Any time you say you're going for a world record it puts a little more pressure on you out there. The guys ran well," said Sowinski. "To break the world record by six seconds is awesome." Other ABer results in NYC included a pair of second place finishes for Jack Whitt (2nd in the PV at 5.47 or 17-11.25) and Manteo Mitchell (32.81 in the 300 meter dash).

The good stuff was not confined to the just the East Coast. The University of Washington offered a full slate of events at their UW Invitational. And there was a slew of ABers in Seattle. Jeremy Taiwo posted a meet record 6344 points in taking the heptathlon. He took first in the long jump, shot put...wait it's easier to list the event he didn't win - the 60 meter dash; when you take 6 of 7 of the events, your odds of winning go up. Check out Jeremy's interview after his world leading performance. Ryan Hill took the mile in 3:56.84 over a returning Andrew Wheating; Hill also anchored the winning DMR team so that sounds like a pretty good day. Dan Quigley got 8th in the 3000 with a 7:57.50 behind Andrew Bumbalough's 7:51.26. On the distaff side, Polina Carlson scored a win in the 5k with a time of 16:20.85 and a trio of ABers took 4th (Bridget Franek - 9:17.35), 6th (Kimber Mattox - 9:22.27) and 8th (Juli Accurso - 9:23.46) in the 3000.

Surround yourself with those who make you feel limitless! #Motivation #DreamBig #grateful pic.twitter.com/dkDhLNNnYU

And things don't slow down this weekend. The USATF indoor series continues with a meet in Boston. Out in Boulder, we have the USATF Cross Country Championships. Confirmed AB entries include Sara Hall, Jonathan Peterson, and Jeff See. Had to wonder about the choice of venue - in the shadow of the Rockies in early February? Was it chosen because of a similar climate to Guiyang China, where the World Championships will be held? A quick read of Wikipedia suggests not. Anyway, check out the forecast in Boulder for this weekend - sunny and a high of 67 degrees!

By the way, the groundhog came out and saw his shadow on Monday morning. Six more weeks of indoor track! 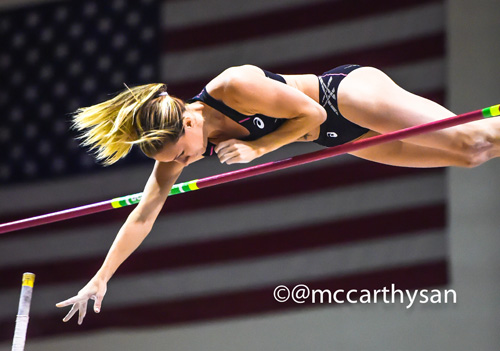