Wow, I can’t believe that the 2016 season is already over. Seems like just a few weeks ago I was writing my 2015 recap and looking forward to the 2016 Olympic season. So what all has changed since September of 2015? Well just like last year, everything and not much at all. 2016, just like 2015, was my most successful to date. Here are a few highlights of the racing season: PR’s at 3,000m and 1500m, Top 5 finish at USATF Road Mile Championship, 2nd place finish at Penn Relays, Top 25 time in the USA at 1500m, Olympic Trials Qualifier at 1500m, and a Olympic Trials Semi-Finalist. More important than all of these meaningless marks, was the formation of #TeamBrandon and the #VictoryOverVasculitis campaign with the Vasculitis Foundation.

This year, like so many in the past, has been a ferocious roller coaster. While writing this piece I stumbled on an analogy to describe my past few years. 2014 and 2015 riding a roller coaster I had never seen before. I was basically a kid on a coaster that I was barely old enough to ride, so my head was banging around in the restraints. In 2016 I strapped myself in for another ride, but this time I’m a little taller, a little more prepared for the sharp turns, fast descents and learned to hang on to the straps in those tough loop de loops. The year wasn’t void of struggles, I was just better prepared to handle the intensity of the year. It may have seemed from the outside that the season was a giant success, and it was, but the fall from accomplishing one huge goal and missing another hurts. 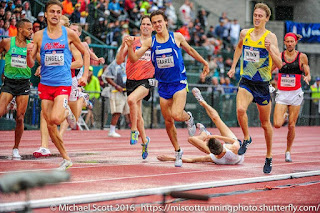 Championship 1500m races are as unpredictable as life

Part of growing as a person that struggles with anxiety and depression, is learning to notice signs and symptoms. The goal for me isn’t to be even kill, but to be better equipped to handle the ups and down. To me living a flat line isn’t desirable. I would say my biggest victory this year has been not been on the track but in my own mind.

Getting involved with the VF has given my running and my career a lot more purpose. As I have said many times, when I was first Diagnosed with Granulomatosis with Polyangitis back in 2008, I did my best to hide it from people. It was something that I hated talking about. Like so many people that suffer silently from Vasculitis, it was something that I just couldn’t explain to people, why I was sick, but looked fine. They didn’t get it, so I just didn’t talk about it at all. Even when I was in remission, I did my best to not ever talk about the subject, and even a few times when I couldn’t avoid the conversation, I just told people I had cancer. I’m not proud of that now, but it’s an unfortunate process that most Vasculitis patients have to go through. But something changed in my mentality a few years ago. I was tired of hiding it. I realized that by me explaining to people what I had been through, that I wasn’t making an excuse, but telling people a story of perseverance that I had survived. There was nothing to be ashamed of anymore and I needed to use my platform as an athlete to inspire others. This #VictoryOverVascuilits campaign has given me more opportunities to share my story and for others to share in the journey. The campaign is about building a community for people that suffer from Vasculitis. That includes the family members and loved ones of Vasculitis patients.

We are all in this together. Together we can help raise awareness and funds for Vasculitis research and education tools. When we started the campaign I thought it was going to be me leading the charge to get people motivated to raise awareness and inspire people to chase a dream. Well I quickly learned that I wasn’t going to be the sole voice. Each and every person that has contributed miles, steps, or awareness and shared it has inspired me more than most of you will ever know. That’s when I realized that this was an important community, not just a campaign. We are all here for each other, to lean on each other when times are tough, to inspire us when we are down, and share in the victories together. A victory for one of us is a victory for all on #TeamBrandon. When I stood on the starting line at the 2016 Olympic Trials with the Vasculitis Foundation Logo over my heart, I was standing on the line for all of us! It was victory we all got to celebrate. My only regret is that we didn’t get to celebrate one more day in Eugene, OR at Hayward field with a spot in the 1500m final. If that’s my only regret on the track this year, I can happily close the book on 2016 and look forward to what 2017 has in store for #TeamBrandon!

Before I leave you all, I would like to thank a few people. To start, my wonderful Mom and Dad who have shown more love than I knew was possible for their children. As you can see below, they are the glue that holds this family together. 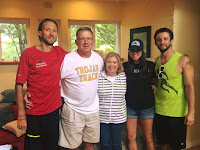 My partner Ryanna, who has stood by my side through some incredibly difficult times both physically and emotionally. She makes me a stronger person. My Coach, James Snyder, who has believed in my talent and work ethic to fight through all the physical and emotional challenges I’ve had. My siblings, Tyler and Calli, who are the coolest siblings I could ever ask for and who have my back no matter how many times we have all pissed each other off. My best friend, Moen, who I’ve shared thousand of miles with and possibly even more words than miles. If someone would let us, we may solve all the world’s problems. Ed Becker and Joyce Kullman who fought for the VF #TeamBrandon campaign and listened to all my crazy ideas and have worked tirelessly behind the scenes to make everything happen. You guys rock! And last but certainly not least, everyone on #TeamBrandon. My goal is to inspire you all as much as you have inspired me! We are all more together!

So what’s next? Well I’m still currently sponsor-less and jobless, but more determined than ever to find a way to make a living in the sport I love. The rest of 2016 will be relatively quiet on the racing front, but stay tuned. I’ve managed to wedge my foot in the door of professional track and field, so now it’s time to kick the #!%^*$& open! Time to rest up and get ready for an even bigger 2017! 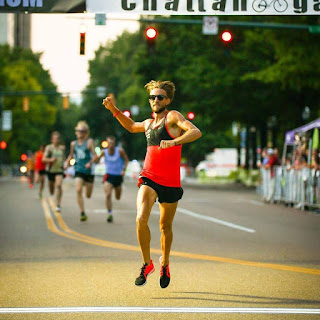