Come mid-May (Division 1 conference championship weekend), I am always reminded why I am so glad to be done with college racing. I miss the nice hotels, the prepared itinerary, and especially the per diem, but, without exception, I was so burned out by this time of year I could hardly get over a barrier. I opine that three seasons of NCAA distance running is too much to expect out of collegians. Runners are likely to get injured or burned out at some point during the year, but there is usually a lot of pressure to push through these setbacks. Another qualifying meet/conference championship/national meet is always just around the corner. For this reason, it seems very rare for a collegiate runner to compete well throughout all three seasons.

Of course the body gets really run down, but so does the mind. I believe mental training is an overlooked aspect of competitive running. In an earlier blog, I wrote about three levels of training I put into my mental fitness:

1. Knowing where to direct your mind over the course of the race
2. Carefully choosing when to race and how often to give your all-out effort.
3. Getting your mind in shape before racing through mindfulness and workouts.

I wrote about #1 in my last blog post, so today I want to tackle #2. College kids rarely get to choose when they race and they can get in big trouble if they give anything less than 100%. I am fortunate I get to make my own choices now.

An important part of growing as a runner is to know how often and when you are able to go your absolute all-out. I was taught by my high school coach, Ben Zhao, the difference between a hard effort and red-lining (that edge of pushing your body as hard as it can go without breaking down). I was able to peak at state cross country and track meets in high school because I started the season slowly. I treated the first few races as a workout, then progressed to red-lining at the end of a race, and finally ran as hard as I could at the state meet. In college, I wasn’t able to regulate the build-up as well. I was able to perform well in cross country, indoor track, and the first race of outdoor before my body and mind started to shut down. I kept up that pattern until my mind completely rebelled during my third year, and I had to struggle to compete while treating a disabling depression.

In this Olympic year, peaking at the right time, both physically and mentally, is key. I know that while my mind is gritty and fierce, I have to be very frugal about the amount of times I red-line, whether working out or racing. The amount of redlining a body/mind can handle is different for everyone. There are some runners who seem to be able to crank out an amazing amount of successful races in a year and are able to sustain that success over the long-term.

My plan was to do a couple workout races this fall, hit that red-line briefly during indoor races, and now, in the couple months leading up to Olympic Trials, get more familiar with that red-line state of being while not going overboard. As with every other part of competitive running, it is a tricky balance, but one I’m glad I’ve had many years to practice. 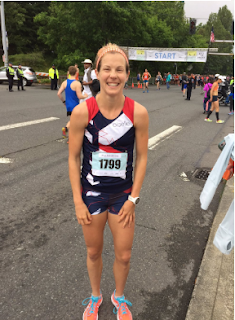 Sometimes you have a lot of fun. 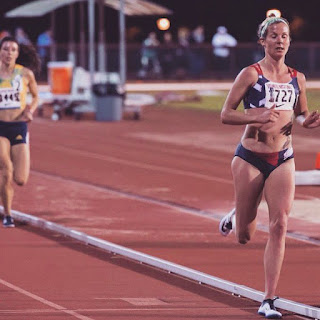 Sometimes you are in a lot of pain. 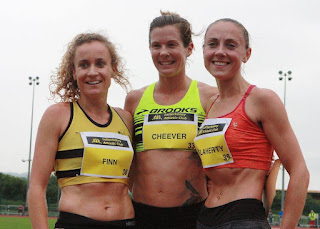 Hopefully it’s a good mix of both. 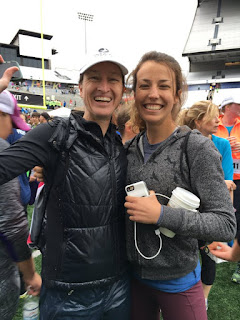 With cool people to celebrate with.

Check out and shop at Jamie’s Oiselle store; any purchase supports her journey!