Ever heard that slogan “When it rains, it pours”? Of course not. 2015 has been one of those slogan type of years. From a lingering ankle injury post Mexico Skyrace that carried into 2015 from 2014 to getting some stomach bug from the beautiful beach drinks of Columbia, I’ve had a tough time…to say the least. At the 50k Championships I couldn’t run more than 20 mins before having to pull off course to potty (Many times). That subsided while I took a break from running in March. I jumped back into training and just took it easy without trying to rush. I had some goals for the season but I had my mind made up that if I wasn’t ready I wouldn’t go anywhere. That’s exactly what happened, I pulled out of a race. I believe the first time I have done that in my pro career. It felt horrible mentally to do that but after this past weekend I’m extremely happy I did.

The Mountain Games started off like any other year. I typically like to go out there if not to compete at least to vacate and soak up the atmosphere while checking out some events outside of my craft that interest me like the Dog Jumping, Mountain Biking, Kayaking, and Road bike time trial. This year was a little different in that thanks to Ellen M. I was able to lead some events.

I lead the kickoff for the Vail Running Club as well as the kickoff for the Mountain Games! A day or so before, I lead another group event out at Zac Shanle’s new run shop in Edwards, CO called Peak Performance Footwear. Great store with lots of options and knowledgeable staff. If you are in the Eagle County area and need to get some Spenco Insoles or SCOTT Sports footwear Zac is your guy! Both group events went awesome and I’d like to especially thank SOS Rehydrate, SCOTT Sports, Elevated Legs, Mio Global and the Vail Vitality Center for their help in sorting these events! Hoping to expand upon these in the future.

Athletes who attended were able to check out all of the above sponsors’ products and get a glimpse into some vital gear that impact my training and racing experiences. 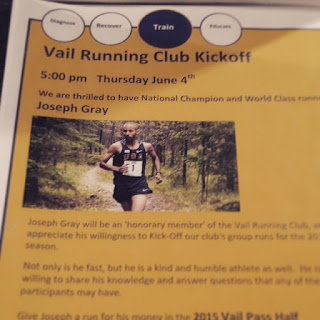 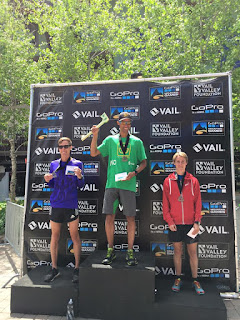 I decided last minute to double since I hadn’t done much in terms of specific mountain training this season. So I wanted to use this weekend as a training vacation…or Traincation?? The half marathon went as planned. I wanted to get a solid tempo just below threshold effort. I ended up 2nd in the end to a very solid performance from an Eritrean athlete who also happened to be a heel clicker for a few miles until I verbally let him know I wasn’t gonna tolerate it. Something about athletes who race like this guy. Really takes the excitement away from the event. All in all, we both broke the course record for the event.

Day 2 Vasque Spring Run-Off 10k… I had won this event in the past so I definitely wanted to come out and redeem myself after a loss the previous day. I did something I almost never do, used a fresh pair of shoes for a race. I finally got my hand on some of the new SCOTT Sports RC line and after walking in them for a few minutes I know without a shadow of a doubt I they were extremely comfortable and would not give me a blister. From the gun a familiar face in Andy W. and I pulled way out in front of the field and from there we just cruised a few miles together. I later started to get a little gap which held to the finish. I checked my Mio Alpha2 frequently to keep an eye on my effort and assure that I didn’t redline as the race did start above 8,000 feet! I was relieved to see the finish line after having a lot of pressure to come out and repeat this year. I was even more excited to see that I broke the course record for this course. There have been 2 or even 3 different courses here as some years the snow changes the route of the course. Results on my twitter page.

Now my focus will start to shift as the National Mountain Running Championships and some other major mountain races approach! Happy Monday and thanks for reading!

View all articles by Joseph Gray