I can’t help but smile as I think about my return to racing after 18 months away from my passion battling my Granulomatosis with Polyangiitis. A year ago at this time, I was battling not just my own body to stay alive, but insurance and doctors to get the proper treatment regimen scheduled to save my organs from themselves. See, vasculitis isn’t like cancer, it’s not an abnormal cell growth in a certain organ, it’s my white cells (your body’s own defense system) decided that my own organ tissues are now the enemy and working over time to damage them. In essence, they are too good at their job. I often say my mind can be my own worst enemy, but in reality it’s my white blood cells, specifically my B-cells, that have proven to be my biggest protagonist in life. Despite having had 2 previous relapses in 2012 and 2013, neither got serious enough that I was exhibiting major symptoms. 2017’s relapse was not like that. My inflammation markers were so bad, I even had my doctors extremely worried. I was so sick for so many months before finally going to the doctor because I just didn’t want to believe that my historic 2016 was going to end in a nightmare. I should’ve known better. If I had only drug myself to the doctor sooner maybe I could’ve prevented some of my own suffering in 2017, but that’s my unfortunate reality. I also didn’t think that once I got my confirmation of a relapse from my Rheumatologist, that’d it take over a month to get my treatment plan set up. For your sake I’ll save my health care rant for another day. All the while, my body continued to wage war against me. The inflammation from the flare was so severe at times that I struggled to even open my own pill bottles. Nevertheless, my treatments got scheduled, I made some life moves, and somehow managed to stay on relatively stable emotional ground. A much younger and inexperienced Brandon would’ve quickly spiraled out of control. While I’ve made some grave mistakes in life over the last 10 years battling this disease, I’ve also managed to develop a strong support network that keeps this bowling ball out of the gutter. 2017 was bad, very bad, but it could’ve been much worse. The glass is half-full right? 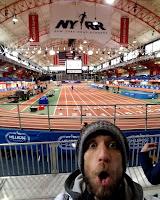 A year later it’s comforting to sit here and write about another comeback to the sport I’ve dedicated my life. I was naive enough to think that this comeback would produce much faster results, but those lofty goals and standards of success are what drives me to continue to this day.  For some dumb reason I thought that I could ascend to fitness levels of 2016 again, without the work that I had put in during 2013, 2014, 2015, and 2016. In sport and exercise it’s often easier to ascend mountains again once you’ve been there, but I forgot that it still takes time. In my case I thought that even after 13 months of fighting an internal civil war that I could just put in 8 hard weeks of training without any base phase and get back to tip top shape. Boy was I wrong. I couldn’t have been more wrong. My body definitely had a lot more healing to do and a lot more to overcome than I anticipated. No matter how hard I pushed in training, my body just couldn’t handle the work loads of previous years. As January rolled around and passed, I started looking and feeling fit, but looks can be deceiving. When I resumed training in late November for this indoor track season, I was extremely anemic and working with a body that hadn’t put in strenuous exercise for 11 months. Plus I’m no spring chicken, despite missing several years of my 20 year running career battling vasculitis, there are a lot of miles on this body. But I also thought that experience could help aid my comeback, #oldmanstrength. Above all else, the most important aspect of aerobic activity is the availability of red blood cells to carry oxygen to working muscles. My body wasn’t just a little anemic, it was grossly anemic. If a 280 year old female could even be on her period and checked in her coffin, she would probably still have a higher hematocrit count than I had in November. Without cheating the rules of my sport, the only ways to raise them all take time, of which I had very little. But Snyder (James Snyder my coach and the Head Distance Coach at Temple University) and I developed a plan of action in training and submitted my body to sessions of intense intervals that would normally only be undertaken after months of previous base work to harden and prep the body. 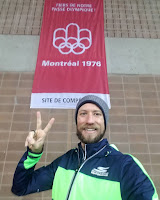 It paid off to an extent. I was able to get back into good enough shape that I could line up for some races. We thought that I could probably race myself into some shape during the month of February and that’s precisely what we did. Initially we had planned to attack the mile, and in classic Brandon fashion I had to try twice just to make sure my assumptions were correct. After 2 piss poor showings over the distance, and feeling embarrassed, we returned to the 800m which I had shown a wink of promise during my 1st race of the season. While the mile is primarily an aerobic event (roughly 80%), the 800m relies a little less on the aerobic system and a little more on the anaerobic system, so my red blood cell counts wouldn’t be quite as much of a determent. 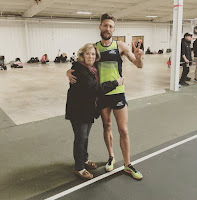 I manged to finish 3rd in my two 800m races to finish off the season, both of them over a second faster than my 1st race just weeks early. So it was progress and I was happy to end the season seeing some progress. More importantly I had fun racing again. The mile races were brash, rude, and unforgiving. Nothing like dreaming of racing at the Millrose Games (the oldest track meet in the world) and getting the opportunity to finish last in the mile by nearly 100m. That’s not how I ever envisioned that ground breaking moment in my career. But as history has shown, I’m good at taking a beating and coming back for more. Every bad race and every knock down is just fuel for the fire.

After a short break and a little top off to make sure my body isn’t gonna kill me anytime soon, I’ll be back for more this outdoor season. I’m more ready for hard intense training than I’ve ever been in my life. It can’t get here soon enough. Right now I feel like Muhammad Ali playing rope-a-dope against George Foreman. I’m biding my time, taking the licks as they come, and waiting to unload. All the while gathering data, talking trash, and eyeing my opponents weaknesses. My 8th round storm my come in 2018 or maybe it has to wait till 2019. No matter when the flurry comes, my opponents better beware because I’ll be poking and prodding with my jabs come outdoor 2018. 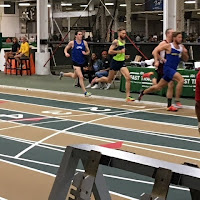 I’m patient though. Because I know that I can suffer more and go to further lengths to chase those career defining performances than any competitor I’ve seen. As I approach this treacherous climb to the ascent, I know that I have the help of not just #TeamBrandon, but the entire Vasculitis community at my back pushing me up the mountain. This dream is no longer about just proving stuff to myself, it’s about proving to people all over the world that chasing your dream and carrying a worthwhile burden is worth the effort. See you outdoors!

BHudg
All Hope is Gone
#runtoinspire 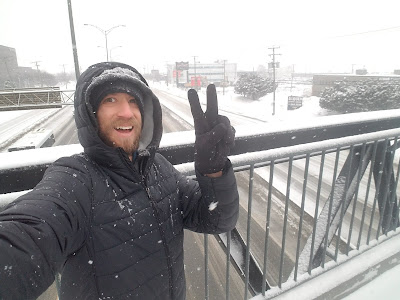