Coming down from the Ridge. 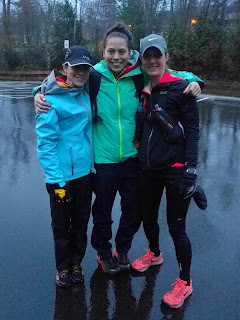 Just another rainy Saturday morning with my training buddies Corrine and Nikki.

Since Krissy Moehl moved back to Bellingham she has become a dear friend of mine. Over the course of the past year, I have heard of the excitement building for the 25th anniversary of the Chuckanut 50k. Visions of sky writers, balloons, fireworks and lots and lots of sparkles danced in the planning committee’s heads. This was going to be an unforgettable event and I wanted to be a part of it. But this time with a bib number pinned to my shirt.

We started training for the race in December. Tad studied splits from racers past to get a feel of what we needed to do. We had intentions of running each section of the course exactly as how I would in the race. Per usual, we were going to be as dialed in as possible. But like most things with running, rarely does training go as planned. This year’s unprecedented snow really limited our ability to train on the course safely and made workouts near impossible. I mentioned in my Fragrance Lake Half Marathon report that I have been unable to get on a role with my training for a year now. This frustrating pattern continues. Though Fragrance Lake went really well, I had to take a couple days off prior to the race due to hip pain and then I had to take a week off afterwards due to a high hamstring pain.

So, as Chuckanut crept closer, my ambitious goals became softer to the point we were like, okay, let’s just get to the starting line healthy and have a good experience.

Because I missed or had to cut short several long runs, my confidence leading up the race was really lacking. To be honest, I was terrified. I have only raced two trail marathons in my life and the 50k distance really intimidated me. I was worried about how my legs would feel – would I be able to finish without pain, what was the right way to fuel, what was I going to wear? So much to think about; it was exhausting. I started packing for the race two weeks out…and I live here! #OCD #anxiety 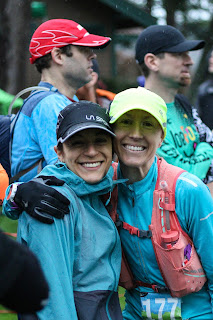 It was only the week before the race that the snow melted from the course. Tad and I went up on Monday to run the Ridge because I haven’t been able to get on it for a couple of months. It was surprisingly dry and in great condition. However, these conditions were quick to change as the night before the race brought downpours that absolutely trashed the Chuckanut trails into a muddy slip and slide obstacle course.

Since I am in no shape to race the lead women, who are some of the nation’s finest talent, my race execution was to just run my own race. I really wanted my first ultra to be a positive experience, without any major catastrophes and maybe even have a little fun along the way. I let everyone take off and stayed a controlled 7:00-7:10 pace on the way out on the Interurban trail, knowing that the key was having legs for the return 10k. As someone who usually races half marathons to 25k, I felt my biggest challenge was to just stay calm and patient and not let my anxiety have a voice. 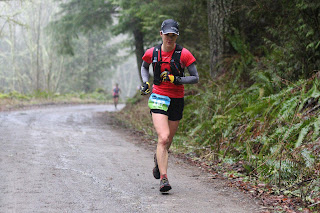 Crawling up Cleator with Corrine

At aid #1, I took off my Hail Jacket and traded my handheld for a vest. My adventure through the middle 18 miles was pretty uneventful. I ran mostly alone, completely comfortably, and never experienced any lows. You know that song from The Band, “Up On Cripple Creek”? Well, I had the lyric, “When I get off of this mountain, you know where I wanna go…” playing in my head. I just kept moving, never once having to walk until the steep sections of Chinscraper, which is where I felt my strongest. I passed a lot of men and one woman who informed me I was now in 5th position. 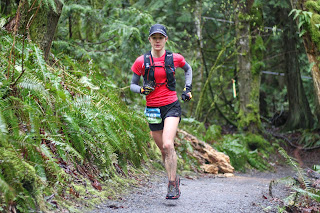 “When I get off of this mountain…”

My one kryptonite was my Reynaud’s Syndrome. My hands became so numb even though I had handwarmers. Once handwarmers get wet they are useless and then my hands are useless. I couldn’t open any GU’s or drink any water from Lost Lake down to the last aid station. I wasn’t able to put my gloves back on after trying to unzip my pack pocket and needed assistance from aid station volunteers to help me put my gloves back on. (Thank you, Michael!)

I flowed back down Fragrance Lake Road to the final aid station where I was to meet Tad to trade back my vest for the handheld for the final 10k. I yelled that my hands were too numb to take the handheld and that I was so thirsty, but my mouth was too numb to drink water. Tad had to hold a bottle and feed me like a baby bird. He opened two GU’s for me which I held in each hand and kept my vest on for the final stretch. 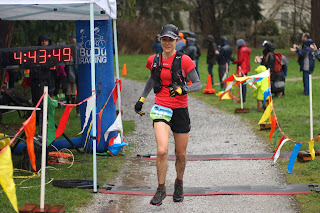 I felt pretty strong coming in, only frustrated with losing time stopping at the road crossing for cars. I struggled to keep pace the final mile, but made it to the finish line as 5th woman, with all my limbs intact and a smile on my face. Goals met. The whole race I kept telling myself that I only had to run 30 miles because the final 1+ miles are just excitement and adrenaline. Turns out, that didn’t happen. There was no magical energy source that usually comes at the end of the race. It was just, “get me to the damn finish chute already!” 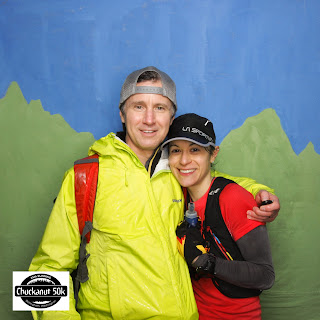 Overall, I am very pleased with my first Chuckanut 50k, my ultra debut. I am so incredibly thankful that I was able to run the whole race pain-free (hip and hamstring were fine and I’m feeling pretty good two days later!), considering that I couldn’t run 60 seconds 2.5 weeks ago without pain. It was a positive experience surrounded by my amazing Bellingham community and friends.

As they say, you never forget your first time.

Congratulations to EVERYBODY who crossed the finish line from 1st place to last; this was no easy feat in many regards and took perseverance, strength and a good sense of humor. Well done! 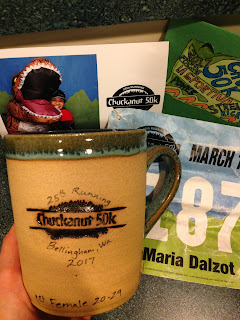 All of the wonderful aid station volunteers, especially Michael Plummer and CamE Tasker, and to all those from the community who came out to cheer. It means so much!

Tad, the world’s best spectator…and coach, and photographer, and pack mule, and husband, and crew, etc. I love you!

Kerry Gustafson of PRiME Massage and Sports Medicine and Dr. Chris Lockwood of Align Chiropractic.  I am infinitely grateful for all the time these two have put into me. Seriously two of my favorite people!

My training partners (Nikki Vander Wiele, Scarlett Graham, Corrine Malcolm, Andrew Taylor, Christian Blankenship) who met me every Saturday morning since December at 8:00am at the bottom of Cleator Road to go up and down Fragrance lake over and over because the rest of the course was covered in snow. 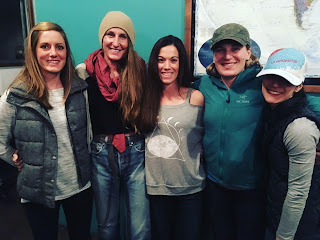 Hanging out with my gorgeous BDP teammates at the after party. PC: Courtney Olsen

What’s next? I want to get the hell off Chuckanut Mountain and go find some sun! I will be racing Rainshadow Running’s Yakima Skyline Rim 25k and Sun Mountain 25k in preparation for the Mont Blanc Marathon in Chamonix, France on June 25th.