So it’s only May and I want to save some superlatives for the long season ahead but the athletes are making it difficult. Excellent performances at the IAAF Relays in Nassau and the Payton Jordan Invitational at Stanford and notable results at other venues around the country.

It Is Indeed Better in the Bahamas

USA teams took seven of the ten races at the IAAF World Relays and AB athletes’ fingerprints are all over the results. Before Saturday, Sanya Richards-Ross had never been a) part of a distance medley relay team and b) part of a world record setting team. Both have now been addressed as SRR’s 50.12 400 leg gave the US a lead they would not surrender and sent them on the way to a WR 10:36.50. Sunday, she was even faster – 48.79! – running the third leg on the victorious 4 x 400 team. Yeah, it was a good weekend for her. 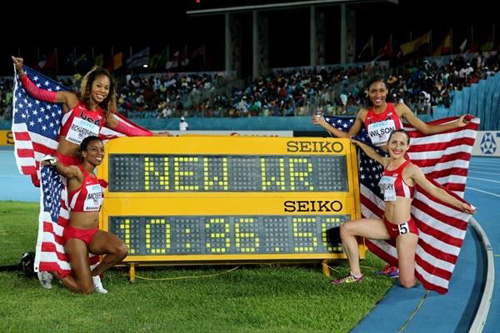 Chanelle Price and new AB signees Maggie Vessey and Molly Beckwith-Ludlow handled the first three legs of the 4 x 800 team that won easily, setting an American record of 8:00.62 in the process.  Price’s 2:01.30 was a nice rebound after the mildly disappointing performance at Drake and Vessey’s 2:00.92 leg gave the Americans a comfortable 20 meter lead at the next handoff.

On the men’s side, the 4 x 800 win was keyed by Erik Sowinski‘s second leg, which featured a blistering second lap; his 1:44.75 split put the US in a commanding position from which they were never really threatened. Check out the video – Sowinski’s kick is at about :47 – love the commentators characterization of the Sowinski’s leg as “storming!”

One good DMR WR deserves another so the men’s team of Kyle Merber, Brycen Spratling, Brandon Johnson and Ben Blankenship put together a 9:15.50 to eclipse the old standard by .06. The blog entry for the meet from Merber, who ran a 2:53 opener on the 1200 leg, contains a detailed behind-the-scenes account of the race and the World Relays in general. Money quote for me: “And while up there [on the medals stand], I paused for a moment to remind myself to never forget this feeling–This is why we do it.”

Thus spake AB founder Jack Wickens, who was live at the Payton Jordan Invitational on the campus of Stanford University in Palo Alto, a meet FloTrack noted “will bring together some of the top professional and collegiate runners in the world in an effort to run ridiculously fast under perfect conditions.” To give you an idea of the meet’s depth, Section 2 of the men’s 5k saw 13 runners dip under 13:40. AB athletes were part of that depth.

My condolences to @riley_masters for finding out he’s a 5k guy last night.

Every Minute of Work Is Worth It

A few performances at other venues deserve notice. Kara Winger took the javelin throw at the Longhorn Invitational (Austin, TX) with a toss of 66.47/218-1.

I’ve never felt affirmation quite like I do today. 66.47m and my best series ever: Every minute of work is #worthit. @ASICSamerica #onmyway — Kara Winger (@karathrowsjav) May 3, 2015

At the Tennessee Challenge (Knoxville, TN), Jordan Scott vaulted 5.51/18-1 for second. And while the distance runners may have owned Palo Alto, it was the sprinters who took over Baie Mahault’s Stade Municipal on Guadeloupe. A trio of ABers were winners in the International Meet held there on Saturday. Patrick Feeney continued his excellent spring with a 45.51 win in the 400.

Great weekend in Guadeloupe with some fans, also came away with a win and new PR of 45.51! Extremely thankful. Photo: @jvonjamal

We’ll pause this weekend to catch our collective breath but will be back to check in on the European season and follow up on some domestic meets. Looking forward to the Prefontaine Classic the last weekend in May.