The cold, windy, and sometimes wet weather really put a damper on seemed to have no effect seemed to have spurred athletes to high level performances in Philadelphia and Des Moines this weekend. And thanks to NBCSN, we got to see large chunks of the two bigger relay meets – Penn and Drake – live. Having attended the Penn Relays numerous times, I have to say, IMHO, the event does not translate well to TV, which can’t really capture the carnival atmosphere inside and outside the stadium. Also, Penn is aimed more at the high school and college scene, with the pro events limited mainly to the USA versus the World relay events. Drake however had a full slate of non-relay action.

USA vs the World

The women’s teams took a pair of seconds to Jamaica in the 4 x 100 and 4 x 400 but did eke out a win in the 4 x 200. ABer DeeDee Trotter ran a game 50.95 anchor but couldn’t close the gap. On the men’s side, the Yankees took all three events. For our money, the most stirring performance was the 4 x 400, where ABer Patrick Feeney took the baton with a slim .05 second lead and put down a convincing 44.84 anchor leg to seal the deal. From the picture, yeah, he looks pleased. 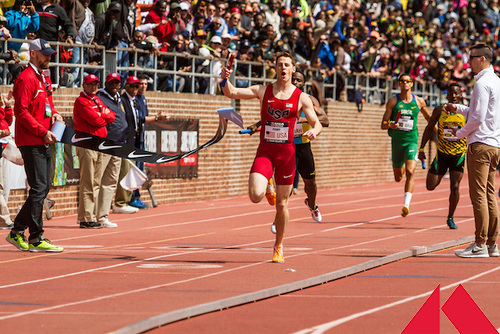 More Than a Track Meet

Besides the competition on the track, the organizers of the Drake Relays have some fun downtown during the week. On Tuesday there’s the Grand Blue Mile. If it’s a road mile, you know Heather Kampf is there; she didn’t disappoint, clocking a 4:35.75 to win the event. ABer Heather Wilson ran well too, taking third with a 4:40.03. In the men’s race, Matt Centrowitz won, but two ABers, Riley Masters and Will Leer took 4th and 6th respectively.

The next night they turned Main Street (well, Court Avenue) into a pole vault venue. Check out this photo: 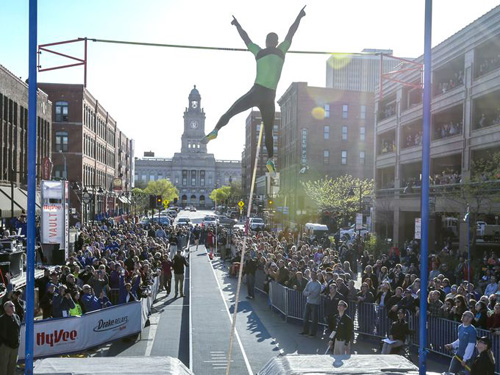 photo by Rodney White, The Register

The questions were being asked if Jasmin Stowers would be able to match her indoor accomplishments once the action moved outdoors. Um, yes.  Her .31 margin of victory over a deep field should leave no doubt. The 12.40 puts her 12th on the all-time list and “It shows me that I can do (well) for the world trials and make the world team and possibly the Olympics the next year.” Queen Harrison ran a sharp 12.76, good for 5th in a deep field.

Speaking of hurdles, Cassandra Tate looked solid taking the 400H in 55.68 holding off Georganne Moline at the tape; Lashinda Demus boldly pushed it early but ran out of gas and finished fifth.

Did You Notice These ABers at Drake?

Heather Miller-Koch served notice that she is back from ACL surgery just 14 months ago, setting a PR and winning the heptathlon with 5,860 points. Riley Dolezal continued to throw well; his 248-11 (75.89) toss was good for second. SRR didn’t seem overly disappointed with her second place finish to Francena McCoroy; sounded like she was looking forward to having Francena on her side this weekend at the IAAF relays in Nassau. Will Leer, who never met a race he didn’t like, was 5th in the mile at 4:02.23; says he’s using all this miling to sharpen for the 5k.

Lots of domestic meets this weekend though none with quite the cachet of Penn or Drake. Most of the attention will be on the fan-favorite IAAF World Relays in Nassau, Bahamas on Saturday and Sunday. The provisional entries on the website show a bunch of ABers, including Erik Sowinski, Will Leer, DeeDee Trotter, Sanya Richards-Ross, Chanelle Price and Gabe Grunewald. TV coverage is on Universal Sports Network on Saturday at 7 pm and Sunday at 2 pm.