A weekend with results truly coming in from north, south, east and west. The meets all are called “Relays” but AB’ers produced a bunch of quality individual performances. The bulk of the action was at the Mt. San Antonio College Relays (Mt. SAC for short) just outside of LA, but the Michael Johnson Invitational (Texas Relays), the Kansas Relays, and the Oregon Relays also feature some great early season efforts. And, there was road work in Boston.

Miles – road or track or metric

A trio of ABers competed in the Boston Athletic Association Invitational Mile. Heather Kampf, “Queen of the Road Mile,” took second in 4:37.0 behind Dawit Seyaum’s 4:35.4. Rachel Schneider, in her first road mile, was 4th in 4:40.8 and Gabe Grunewald was 5th in 4:43.4. 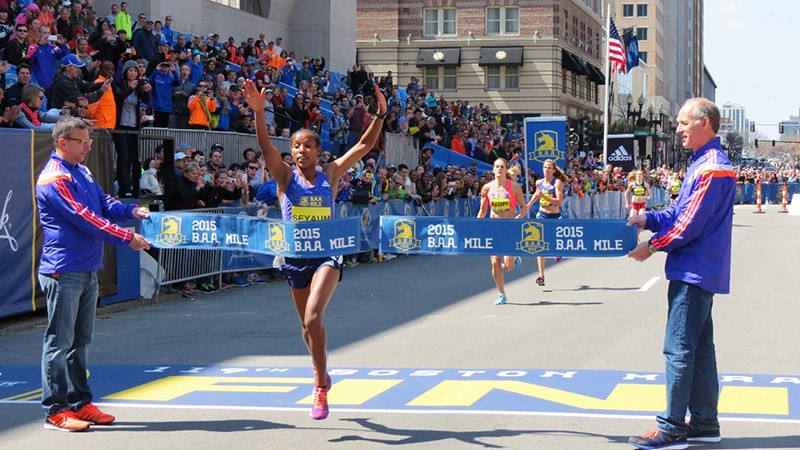 Trackside, Sarah Brown made it clear that she’s ready for a great season with a fast 1500 win at Mt. SAC in 4:08. Looks like that early week prep work she tweeted about really paid off.

Cool shot from @vaultermagazine at the Texas Relays. Hopefully we get some good weather at Kansas this weekend. #polevault #polevaulting #nike   A photo posted by Jack Whitt (@jackwhittpv) on Apr 14, 2015 at 9:08pm PDT

Bridget Franek’s quote after returning to the competitive arena with a dominating 9:51 steeple win at Eugene could also apply to a couple other fine distance running performances by AB’ers. At Mt. SAC, comebacking Neely Gracey pushed the pace the whole way and finished in 15:34 for third in the 5k and the ageless legend (and AB board member) Deena Kastor continued her good spring with a win at the MORE/FITNESS/SHAPE Women’s Half Marathon in 1:12.49.

As for Monday’s big event, the Boston Marathon, the USA was well represented at the tape. Your top 5 Men and Women finishers (source):

At the shorter end of the spectrum, Brenda Martinez gave notice by adding to the surge of fast early season fast 800s by USA women with her Mt. SAC win in 2:00.83. Also at Mt. SAC, Erik Sowinski was 3rd in the men’s 800, clocking 1:47.03. Not a real active weekend for AB sprinters, but Patrick Feeney rocked the last straightaway to win the 400 at Mt. SAC with a time of 45.69 (earning a spot in the USA Relay pool at Penn) and Sanya shook out her legs with a 51.49 in Texas.

We’ll be back next week with results from two of the bigger relay carnivals – Drake and Penn.