from Pickle on the Run

“Where am I going now?” I frantically texted my coach after my race at the Las Vegas Rock n’ Roll Half Marathon. After coming 25 seconds short of the Olympic Trials Qualifying time in San Jose, I was encouraged by other athletes to race in Vegas for a fast, flat course. At the ten mile mark at Vegas, I was about 20 seconds under pace for the OTQ. However, Mother Nature came in like a ton of bricks. I hit a 45 mph head wind on the final 5k. I was hardly able to move. I crossed the line more frustrated than disappointed. I had come to Vegas determined, confident, and ready to get the job done. After San Jose, I knew I could physically run the necessary time, I just needed to execute. Strike two. 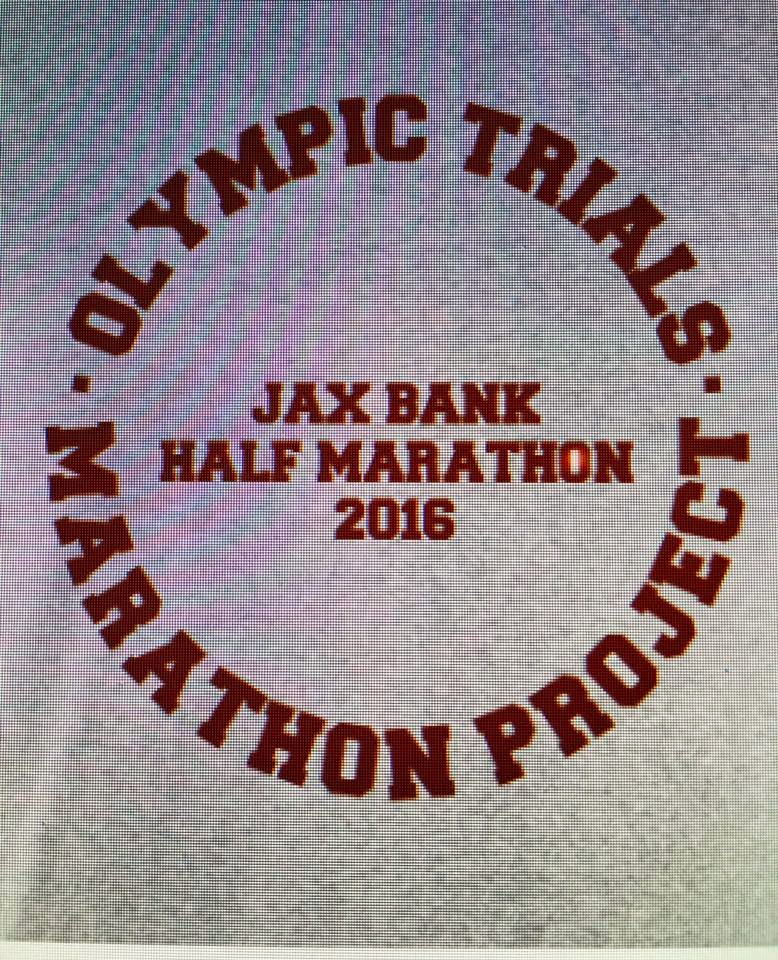 Rather quickly after the race, it became clear to both my coach and me that Jacksonville was the next place to go. Richard Fannin, the race coordinator and one of the most enthusiastic supporters of distance running, had reached out to me prior to Las Vegas asking if I had interest in racing in Jacksonville. He had a mission. He wanted to create a race focused on helping as many men and women achieve the OTQ. His mission became known as “The Olympic Trials Marathon Project.” He brought in elite runners from across the country who already had achieved, or were on a quest to achieve, the OTQ. He brought in top runners Brianne Nelson and Esther Atkins to help pace a pack sub 1:15. When I learned about this unique opportunity, I knew this was where the magic would happen.

At baggage claim in Jacksonville, I met fellow runners and, instead of being eyed up and down, I was greeted with warm smiles and questions about who had the standard and who still needed the time. My apprehension about sharing a suite with three strangers, let alone three of my “competitors,” eased after meeting roomies Stephanie Dinius, Rosie Edwards, and Rachael Brewer. It was like stepping into a kennel full of cute, happy puppies. We exchanged info about our backgrounds, our goals for the race, our foam rollers, and our trail mix. There is something about sharing a pivotal experience with someone that expedites the bonding of friendship. A specific memory that stands out to me was the night before race day. It was going to be a 5:00 am wake up call, which for me, was going to feel like 2:00 am Portland time. Like many, I often have trouble sleeping the night before races. I lie in bed and my mind wanders to the race. I begin to think “what if.” Even an ounce of fear can be a dangerous rabbit hole. Thankfully, my amazing roomie Steph must moonlight as a “Runner Night-Before-Race-Day Whisperer.” With a few calming words, she had me cutting Zzs. It wasn’t so much what she said to me that proved helpful, but rather the realization that she genuinely cared. I can’t thank her and the other women enough for creating an energy that fostered positivity.

“Brrrring brrrrring!” went my iPhone alarm promptly at 4:57 am. The time between waking up and getting on the bus to the start line was a blur. Gulping down my French press, quickly forcing down a banana and a bar, and making plenty of trips to the bathroom, I completed my pre-race routine.

At the start line, I met Steph’s gaze. We nodded at each other. It was go time. The gun went off and soon after I heard Brianne Nelson holler “OTQ women here!” I placed myself exactly where I wanted to be, on Brianne’s left shoulder. My plan was to stick on Brianne’s shoulder and let her do the work. I wasn’t going to worry about my Garmin, what the clock showed at every mile, or how I felt. It was me, Brianne, Brianne’s left shoulder, and a pack of women all working together to chase a dream. We were individuals, but we were a team effort. We were in a race, but we weren’t competing so much as we were supporting. I told myself “this is something special.” 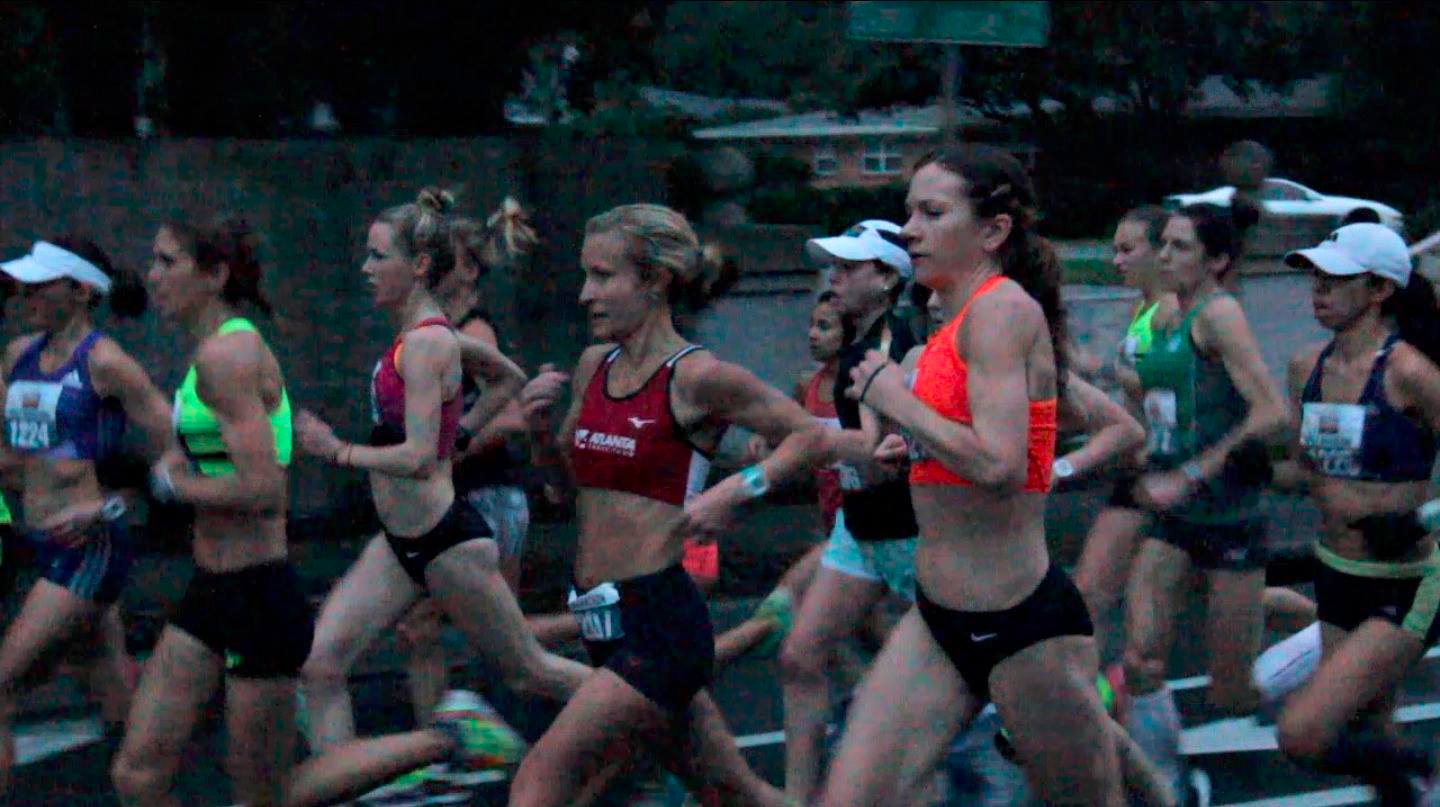 There were a few moments during the race where I thought: “This is it. Today is the day.” I felt like I was finally going to get the time. But, I quickly questioned it. Sometimes, when I want something so badly and have tried over and over again, the idea of actually achieving it seems unobtainable. It’s not a matter of doubting my abilities, but a matter of doubting the manifestation of a dream truly coming to life. 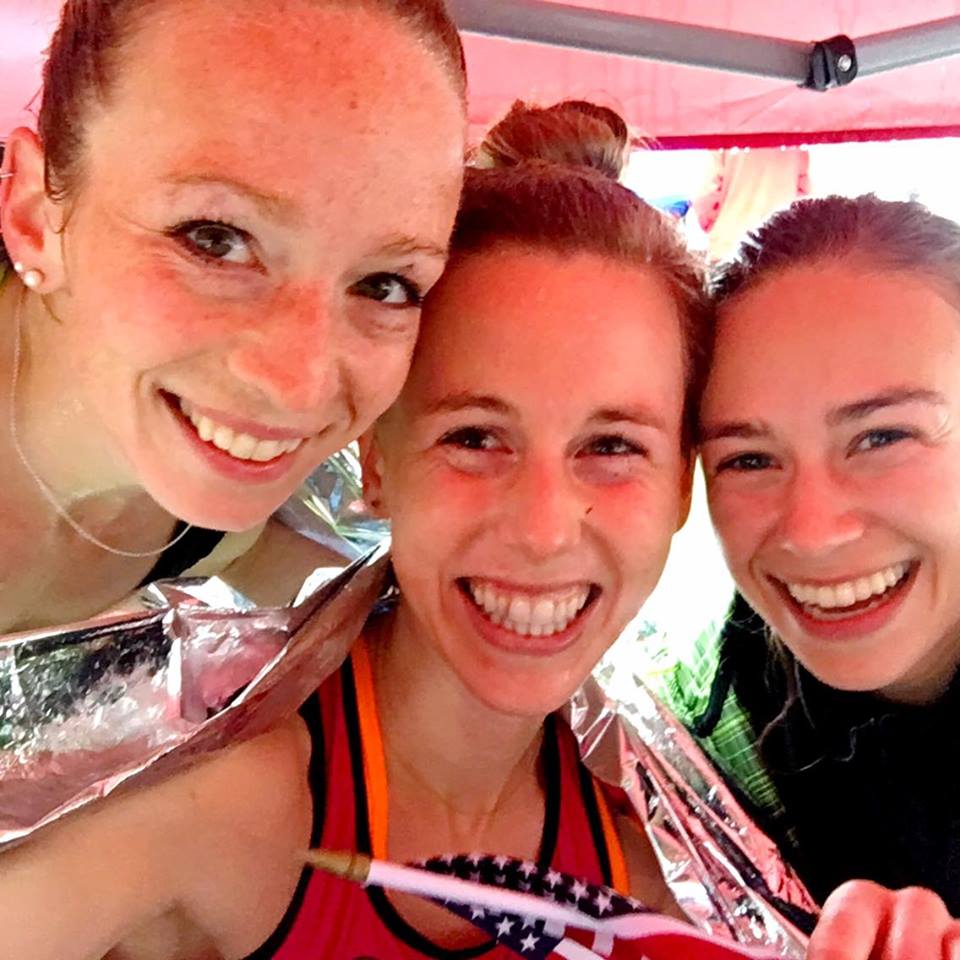 Esther, Steph and me under the tent post-race

Turning onto the track with 300 meters to go, I could hear my mom’s voice in my head. Her voice was so loud I honestly thought she was perhaps standing in the infield. She was yelling, “Use your arms, Liv! Use your arms!” Pumping my arms as hard as I could, I approached the straightaway. For the first time, I saw a clock that made me smile rather than crumble. 1:14:00…1:14:10…1:14:15 and boom! I felt a rush of joy. I did it. Within five seconds of crossing the finish line, I found myself embraced in Richard’s bear hug. Then, I started hugging everyone and anyone around me.

As cheesy as it sounds, I truly believe in the saying “it takes a village.” Yes, it was my body that crossed the line in 1:14:15. Yes, “Olivia Mickle” shows up in the results. But, my name is there thanks to a huge list of people. The result is a reflection of the support I receive from my family, my coach, my friends, my massage therapist, my physical therapist, the guys who happily let me drag them out to help me with my workouts in exchange for beer, my coworkers, and my partnerships with Roll Recovery and Seed Oil Company. Thank you all for helping me achieve this goal of mine and I line up on February 13th in LA with all of you behind me.

This is my happy face. (Thank you, again, Wendy, for capturing this moment!)

View all articles by Olivia Mickle