I’ve raced in New York dozens of times. Stepping off the train from Providence to Penn Station feels like a familiar routine by now. I’d been a peripheral part of Marathon weekend before, but I soon found out that nothing compares to actually racing through the 5 boroughs yourself.

The marathon as an event feels larger than life.

The days leading up the race had a few reminders that this was unlike any road races I was used to.

Much to my excitement, Saucony had designed a special uniform. I had suggested a few ideas, noting how cool the old school 80’s kits were. It’s the decade I was born, but also a decade full of great American running. The 80’s saw Joan Samuelson win the first ever women’s Olympic Marathon. It saw Saucony’s Rod Dixon win a thrilling NYC marathon showdown with future Boston champ Geoff Smith. It was an inspiring decade in US running with spectacular fashion in general. We came away with a patriotic stars and striped themed white tank top. I felt like a more subdued version of an American Gladiator, which was perfect. 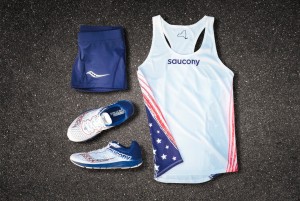 As another reminder of the weight of the occasion, a peek at the pre race expo saw large NYC- themed pictures of me at the Saucony booth. Flattering attention for sure, but I really hoped I didn’t mess this up! 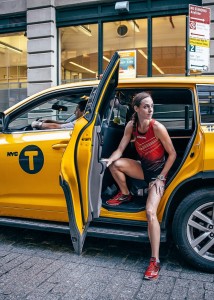 Am I late for the start?

The media coverage was more than I had experienced at any Olympic Games or Championship race, where despite the enormity of those events you are at best only one piece of the 21 ring circus of track and field. Here, we were leading the main event, (literally, as the ladies start first), and NYRR gave us a platform and many connections to shine, like being a Team For Kids Ambassador with Tatyana McFadden and Meb.
I was amazed that after a decade of competing I hadn’t experienced anything like this. People seemed to care the most about how we all fared at 26.2 miles. I didn’t quite get it, though I knew a Major Marathon is a big deal; It’s a dramatic event with a lot of money at stake. I learned it also has the hypest of pre-race hype, especially in New York. It’s a gritty yet glamorous event in a gritty yet glamorous city. It’s a place where you may even run with and into celebrities: 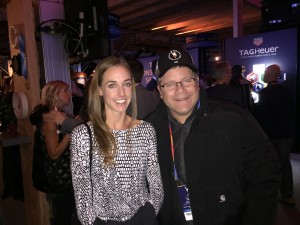 This Rudy (and Goonies) fan was pumped to meet Sean Astin

The bus ride from Manhattan to Staten Island gives you a lot of time to think about how long the race is. It’s nearly an hour to get there by car, knowing the whole way you will strip off the sweats and run back as fast as you can. This was almost a different sport than the 10k or even the half.  I thought about if I was ready for that. I thought about my longest race being only 13 miles. I thought back to my longest run being just under 23 miles at way slower than race pace. I thought about the two separate times my knee got sore and I had to miss a few days and fly to Phoenix to see expert chiropractor, John Ball. But I also remembered that John fixed it in about a week each time. And that I had hit the odd mileage weeks that were double what I had run in track season. I remembered a tempo run that would have stood as a decent half marathon time. After asking around for suggesions, I decided the warmup would be a delightfully short 10 minute jog. The whole field shuffled around the indoor track in different groups and directions, moving to warm up our legs but also to shake off those same anxieties that arose in the still, quiet ride to the start.

I stretched on the start line with 30 other women looking up at the hilly entrance to the Verrazano Narrows Bridge, nervously awaiting the gun to sound as echoes of America The Beautiful faded in the background and a chilly breeze rushed across our thin bodies. It was hard to believe over 50,000 people will follow us because it felt pretty sparse up there!

The start was somewhat anticlimactic. The woman directly behind me was wearing full tights and a jacket with her number pinned over it. Interesting, I thought, that will for sure chafe. I reminded myself to stay behind the leaders as long as possible, not to skip any drinks, embrace the late race grind and we were off. Sort of. It felt like a training run, as we eased up the hill at roughly 6:30 mile pace. This was fine with me, ideally we do this until 10k to go.

Somewhere in Brooklyn, Mary Keitany started booking it at 5:05 pace. I had to make a decision with 17 miles still ahead of me. I tried to maintain contact but I looked at the group of 4 who pulled away and back at Sally Kipyego who was keeping the pace sensible and who I had thought would be smartest to key off.

Either way I didn’t want to end up in no woman’s land so early.

I was alone 5 minutes later, having run a 5:11 mile in an unsuccessful attempt to stay close to the leaders, the wind spitting I told you so’s into my face.

It reminded me of my first ever professional race at USATF 10,000 in 2007. I had gone out with Deena and turned around after she dropped me to realize I was tired and alone, the pack of eventual team makers running their own smartly paced race behind (and soon ahead) of me. Like then, I wished I could run back to the the few I left and try to make up ground with them rather than be hunted down.

Around mile 15, after I lurched up the quiet Queensboro bridge, Sally passed me hard.

Coming off the bridge I ran through a large Saucony-lead cheering section yelling my name. It was one of a few surreal moments from the weekend and one of many reasons why I love the Company.
I chased Sally for the next 11 miles and navigated around 2 side cramps and eventually passed 2 other women who had suffered for going with Mary, but I couldn’t catch her.

With 5k to go I knew I’d make it to the finish without bonking, blistering, losing bodily functions or incurring other unique disasters that can happen in a Marathon. When I passed Joyce Chepkirui late in the Park for third I was happy with the placing, though far behind an NYC legend like Keitany and tantalizingly close to a multi-medalist like Sally. The time wasn’t that fast. I was tired. But I was relieved to close well and saw where I can improve.

When I got back home there was a package waiting for me. It was a sweatshirt that said ‘Marathoner’ in gold letters. Yep, now I feel close to those 50,000 runners. We are all proud that we flew, jogged or trundled through that long, difficult, exhilarating, same thing. Now I get why it’s a big deal. I totally get it.

View all articles by Molly Huddle