The Cutthroat Classic is called a classic for a reason. The race is point-to-point 11 miles that goes 5 miles up and over Cutthroat Pass via the Pacific Crest Trail and then 6 miles of switchbacks down to Cutthroat Lakes Trailhead. The views are incredible, the community even better and the post-race burritos are 10/10. These are just a few of the reasons this race sells out every year, and why I wanted to be a part of the fun.

I first raced Cutthroat in 2014. I had a solid performance, but started the race a bit frazzled as I peed over a hornet’s nest 5 minutes before the start and got stung directly in the buttocks (I always say that with a Forrest Gump accent). You can read more about my experience here.

Since returning from Europe I have not been focused on racing because I was preparing to start a new job working as the dietitian of a bariatric weight management clinic. Now going into my third week, I am getting used to a tighter schedule and working on keeping my anxiety under control. Even though I have felt more tired, I did not back off on mileage going into Cutthroat because I am preparing for the Oregon Coast 50k in October.

My goals for the race were to beat my previous 2014 time of 1:26:12 and to not get stung. (In addition to getting stung in 2014, I got stung by hornets the past two weekends on my mountain runs!) I knew winning was going to be difficult after hearing that the always impressive Ladia Albertson-Junkans would be on the starting line, but I would try to be as close to her as possible. 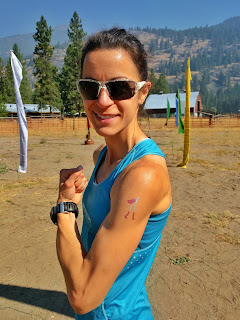 We stayed at the Winthrop KOA which meant a 40-minute drive to the start Saturday morning. I figured it was worth the extra driving time in the morning given the Four Season’s-like amenities at the campground. What I failed to factor in was how crowded the campground would be as people are trying to squeeze out every bit of summer before returning to school, darkness and rain. Obnoxiously large RV’s were pulling in deep into the wee hours of the night and their equally obnoxious owners cackled and yelled, inconsiderate of those trying to sleep. Anyways, I digress.

I got up at 5:00 to a chilly 43-degree morning. Tad brought the heater for the tent and made coffee while I ate my usual pre-race TrailButter and bagel. We left at 6:30 and made it to Rainy Pass Trailhead and first dibs on the bathroom before the bus of racers pulled in from Mazama. We met up with Ladia and jog-chatted until the first wave set off at 8:00. The trail quickly funnels from the parking lot onto the single-track PCT. The lead men took off and I led the train of the chase pack for about a mile and a quarter until Ladia let loose, went by me and off she went. It was kind of mesmerizing to watch her just float away. Then I realized that I had two ladies still right behind me, not missing a step. At about 3 miles, Winthrop’s Novie Mccabe passed me and then Spokane’s Kelly Quinn went by. I felt stuck in first gear and couldn’t respond quickly to their moves so I was now the caboose of the train. After about ¾ a mile I felt like I was having to slow down too much so I carefully took the lead again until a half mile from the top when everyone in the string passed me again. I kept calm, hoping that my improved downhill skills would serve me well. But as we crested up and over Cutthroat Pass, I was left in plumes of dust from my competitors. I worked the downhill as hard as I could, but was never able to catch back up to be within striking distance. I ended up as 4th female with a time of 1:26:02, 10 seconds faster than 2014. 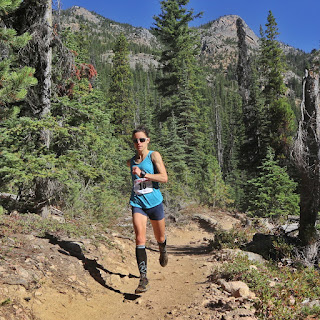 One mile to the finish.

Upon reflection, I was in really good shape in 2014 and ran Cutthroat just 2 months before I won the Trail ½ Marathon National Championship. So even though I didn’t have an ideal race then, I am not in that kind of shape right now to run significantly faster. I think I also underestimated how tired I was going into the race. But overall, it was a hard effort that will serve me well for the future and I got to run on a trail that is close to my heart (Tad proposed on top of Cutthroat Pass in 2015) with good friends on a beautiful day.

I don’t know if it’s me getting older –and hopefully wiser—but I don’t get as upset as I used to when I don’t run as well as I had hoped. There is so much more to racing than the pursuit of times and places, and while I will always work 110% to be the best I can, I also have a better appreciation for the ability to just be able to run in such magical places. As Ladia so poignantly quoted the inspiring Gabe Grunewald after the race, we just need to show up. Show up without expectations and pressure and with an open heart.

One of the many cool parts about this sport is that even if you don’t have a good race you can hit the trails the next day and let the beauty feed your soul. The following day, Tad and I ran the Maple Pass Loop which is easily my new favorite course in the North Cascades. Just wow. If you haven’t made that run/hike yet, please do yourself a favor and check it out. 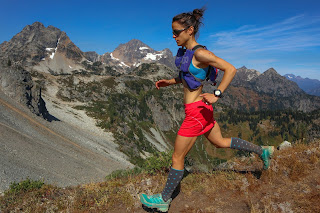 Also, I didn’t get stung once all weekend.

Thanks to Adrienne Schaefer, the new event coordinator, the Methow Trails Event Team and to Winthrop Mountain Sports for such a challenging and fun race experience. Next year is going to be extra special as it will be the 20th anniversary of the race. I hope I can be there to help celebrate.

Thank you to Lily Trotters for sponsoring me in this race. These socks, are not only cute and comfortable, but they also are perfect for keeping clean on these dry dusty trails. You can check out more of their signature compression socks here.

Here’s to squeezing out the last bit of summer.