I can’t truly say that I opened my season yesterday, because I’ve competed twice this year already!  But Nitro Athletics seems like so long ago, and was so early in my actual javelin training that I feel like a different thrower now.

I’ve really enjoyed visiting Austin since Ty was hired at University of Texas in the 2013/2014 school year. I threw at Texas Relays in 2014 and 2015, and the Longhorn Invite in 2015. Last year, I visited twice to train with him in the early season and then again right before Rio. This time around, I brought a little companion down to Texas with me from Colorado! 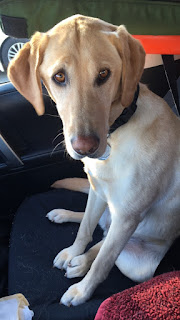 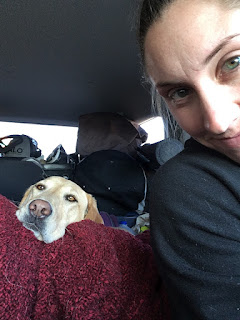 Maddie the Dog is super fun to have around on a training camp, even if our second story rental makes it so I do a lot of stairs with her every day.  She LOVES to swim and fetch, so the park here is ideal to get her wiggles out (although she seems to have an endless supply). 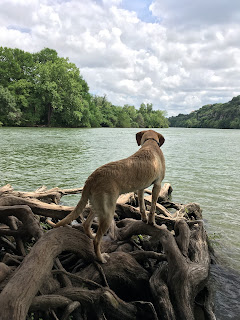 She even inspired my uniform for the meet yesterday! Russ took this photo when they were on an Idaho adventure in February. I loved representing just my little family on the runway!! 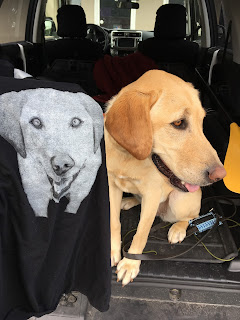 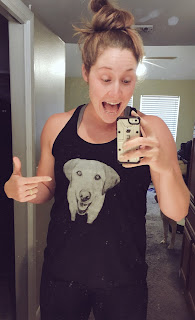 So, I drove to Austin last Sunday, and my week (week 4 of this training block) went like this:

I slept really soundly the night before, which isn’t totally typical of me, and I felt great and calm when I got to the track. I apparently had to balance that out by warming up just a bit too late, and having to pick in the grass before I was really done with everything I usually do! An 85-degree day fixes a lot though, and I wasn’t worried at all that I’d missed some skips, plus there’s always time in warm-ups to step to the side and address little issues you feel.

Warm-ups were not so great. I was pretty slow to my block, and not really feeling connected to my right arm. I was nervous by warm-ups, as I’m always nervous for my first meet, and sometimes that translates into being too careful. I turned my legs on a little and things got better, but I really didn’t know what to expect from the day! My goal was 61.40m, which is the London World Championships A Standard.

In Rio, I added a little carry step before my approach truly begins to get my legs moving a little bit and not just come flying out of the gates. I think it has helped tremendously in letting me keep my posture and to gradually build speed in my legs rather than be forced to create it from the outset. I’ve just never been able to handle speed before, and this has been a really fun way to trick my body into feeling rhythmical while also moving at the velocity I need to throw far.

Since I felt a little all over the place in warm-ups, I just wanted to keep my legs moving, arm back, and stay tall on attempt one. It went really well!! 64.80m. I was absolutely shocked when the officials read the distance, because not only did it not look that far, but I didn’t feel connected to that javelin!

In Australia, I had a really great conversation about connection with my friend Mark Hollis. There is just this extra factor of connection that you sometimes are blessed to feel in this crazy sport, and when you get a hint of that on a meet day, you know it’s going to be a fun one. We struggled to fully describe that feeling in this conversation, but when I mentioned to Ty this week that I felt that way on night one of Nitro Athletics, he said, “Yeah, like you’re moving in slow motion.” YES. But you’re actually moving at full speed, it’s just that you can feel each sequential movement happening in the order that it’s supposed to happen in, and it’s SO FUN and powerful. I felt that way at the Longhorn Invite here two years ago, when I threw 66.47m and a bunch of 63s.

I did NOT feel that way yesterday, which is why I’m so incredibly excited for this season. Russ said that sometimes you’re connected even when you don’t feel it, and I definitely agree with that. I know that was the case yesterday, and I’ve always known that using other body parts correctly can make your arm connected even when it’s not feeling that way, but it was nice for that to be true for me for once. 🙂

The rest of my series was all over the place (my approach wasn’t as smooth, I let my upper body get forward, perhaps the heat got to me, etc.), but I managed a 63.07m in round 5. I’m okay with inconsistency on April 14, especially when I never expected to start with such a bang in the first place! 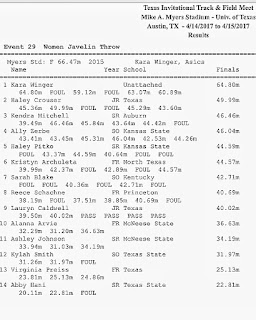 It’s so fun for me to throw with new college girls each year in the early season.  I truly love meeting new throwers, and try to be encouraging at every turn. I think that they’re all getting younger though!

I’m actually still a little shocked. 64.80m is the fifth-best throw of my life, and my best “season opener” by more than 3 meters!! I’m going to do my best to keep calm and carry on, as they say.  This year of training has been incredibly fun, as I actually feel good physically, and I’m competing with a pretty different mindset than I’ve had in the rest of my professional career. I’m excited.

View all articles by Kara Winger