The last 6 miles of the Chuckanut 50k I told myself I never had to run again if I didn’t want to. My left leg was so tight I had to stop countless times to stretch throughout the race (starting at mile 5!) and every mile from the start of the race felt like a struggle. Two years in a row, running that far was not a fun experience and so I thought maybe the 50k distance was not for me.

But as time goes on, we runners tend to forget these things; the pain, the suffering, the soreness. Instead, we remember the camaraderie, the adventure, overcoming adversity and this fuels our fire. So just two months later, there I was contemplating running the Smith Rock Ascent 50km, hosted by Go Beyond Racing. 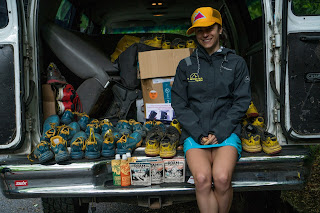 These are a few of my favorite things. PC: Jeff Fisher

Tad and I were on the fence about traveling all the way to Terre Bonne, OR (the town closest to Smith Rock), but when I got a coincidental message from Jenn Love from the Mountain Shop in Portland asking if I would like to come down and lead a La Sportiva demo run sometime, synergy was in play and our minds were made up. 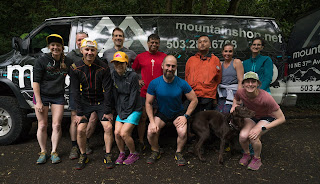 My training since Chuckanut has been about consistency rather than intensity and even though my workouts are not as rigid or aggressive as they used to be, I feel myself getting in shape. Everyday runs are a little bit snappier, I am recovering well, and I have no – knock on wood – pain or tightness in my butt (an ongoing problem). I felt strong three weeks ago at the Yakima Skyline Rim 25k and came within 40 seconds of my course record so that was a good sign as well.

The 50k distance is still so unknown to me. Unlike the sub-ultra distance, I never make goals of trying to win or place because I lack the confidence. It’s more a battle between me and my anxiety, and the longer I am out there, the more opportunity for the voices in my head to talk. The goal is always not to listen. 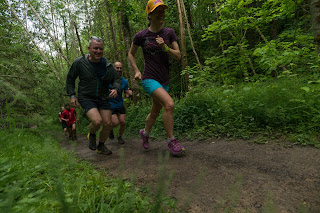 I have never been to Smith Rock, so I didn’t know the course other than studying the map and elevation profile. Another factor coming in to play is central Oregon can get toasty this time of year, so I was concerned about the heat. If it hits 70 in Bellingham it’s a big deal. But we put the course map into my watch and there’s nothing we can do about the weather except run smart and keep up on hydration.

We left for Portland on Thursday morning to meet up with the folks at Mountain Shop to share some miles with the local trail running community and demo the La Sportiva Akasha’s. It was my first time running in Forest Park and I was so impressed. Beautiful buttery green and lush trails that you could really fly on if you wanted to.

We drove to Smith Rock State Park the next morning and got there at about noon. So did a gazillion gnats. Swarms of them. There were no warning signs just tiny pellets hitting you in the face and mouth like a summer rain. My shake-out jog was basically me flailing my arms and complaining with my mouth covered. My goal became to finish the race before the bugs came out. 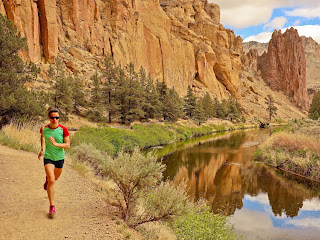 Trying to out-run the bugs.

I knew from Ultra Signup that the competition would be stiff with fellow Washingtonian and friend, Paige Patillo, on the starting line, as well as Tori Tyler, who I raced at the 2014 Trail Half Marathon Championships. Because I get so nervous I was hoping to work together with these ladies and enjoy their company for as long as possible.

As we started the five mile loop around the park, Paige and I calmly navigated our way along the undulating path until the start of the first climb where I began to pull ahead. Paige is a boss at downhill running as I experienced firsthand from our first meeting where she used her natural speed to run me down in the final mile descent, so I knew she would be back with me soon. After the first climb came some flat miles and then a significant downhill where Paige caught back up, just as I had hoped. We came through the first aid station (7ish miles) together, but then started climbing again and I latched on to the man in front of me. We rolled along until he had to stop to pee at the bottom of a sandy hill. I kept going and turned to see if anyone was coming with me, but the chase pack all started to power-hike the hill. I really didn’t feel as though I needed to hike, but then I was thinking they knew something I didn’t. I decided to just keep my pace, nice and controlled. 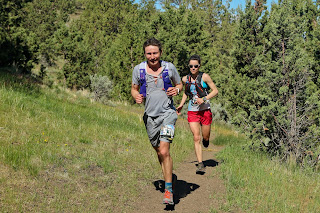 Riley and I working together.

At the second aid station (13ish miles) I started running with Max, but had to let him go as he was not pushing as hard on the climbs. Again, I hesitated, but not too far up ahead was Riley. Riley was a pleasure to run with. We chatted about how these trails remind us of Helena, Montana where he is from and how the Don’t Fence Me In Trail Run was going on at the same time.

Mile 12 seemed to be taking forever and finally, after 20 minutes, I realized that I accidentally stopped my watch and had never restarted it. Riley was kind enough to announce every mile until I pulled away with about 10 miles to go. We were clicking off the sub 7 minute miles so easily I really couldn’t believe it. I kept waiting for my legs to fatigue or my energy level to dip or for the anxiety to rear its ugly head. But nothing ever happened. This was his first ultra and he crushed.

After I crossed the road at mile 24 and prepared for the final ascent, I caught up to Levi who was being challenged by some inner demons. I gave him an unsolicited pep talk and then we worked together to push it up to the final aid station where Yassine and his Wy’east Wolfpack crew were there rocking and ready for us to run through the “tunnel of love.” 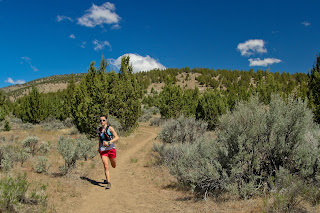 I kicked it into another gear and started catching up to the 15 milers finishing. I enjoyed the momentum of passing the runners and cheering them along, but I got stuck behind a guy who had two ear buds in. I was screaming “excuse me!” and “pardon me!” and “SIR!!!” I contemplated hurling myself in the brush and going around that way, but then he finally heard me and moved to the side. Why didn’t I tap him? Because I am scarred for life from the time I did just that to a lady on the trail in the middle of a race. You can read about that craziness here. 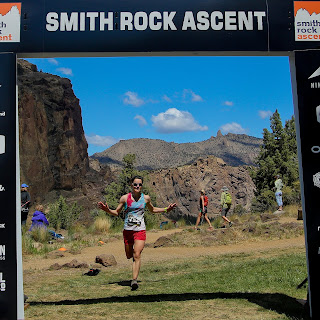 I knew that about 3 miles to the finish we came screaming down a service road so when I looked to my right and saw a road below while the trail I was on was going left I questioned if I was going the right direction and somehow got turned around. I ran backwards until I could ask the next 15-mile runner if we were heading to the road and once he confirmed I took off again. The last 200 meters is up a very steep paved side walk before making the turn into the finish chute.

I felt strong and smooth and loved every mile. I know this is going to sound annoying, but I think I could have done 10 more on that day or I could have run much faster. I am feeling proud of my first ultra win and 8th place overall in the second fastest course time. 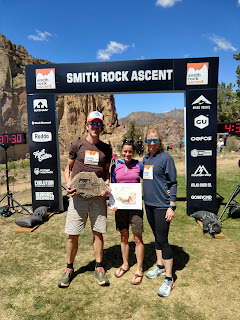 With RD’s Todd and Renee.

After Chuckanut I told you that even my hair hurt. After Smith Rock, I have one toe that looks like it has been through the blender and that’s it. Even though I feel good, Tad is still making me take an easy week (40ish miles) to make sure I am good to go for one final push before we leave for the Marathon du Mont Blanc in Chamonix, France. I can’t believe we will be leaving next month; time is going by so quickly!

Thank you to Todd and Renee from Go Beyond Racing. This win was very special to me and I am so grateful for the awesome print, rock, and pint glasses to always remember it

Thank you to Aid Stations 1&4, 2 and 3 for being so efficient and bringing so much joy, energy, and entertainment to each runner. 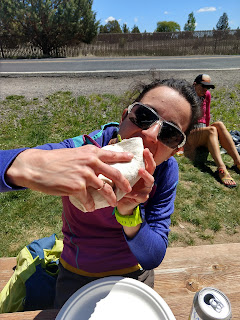 Get in my belly!

Can we just talk about Longboard Louie’s burritos for a minute? SO good and satisfying. Thank you for this fabulous treat and perfect recovery fuel.

Thank you to Max, Riley and Levi for your company and encouragement. You made the race so fun.

Thank you to iRunFar for the shout-out in TWIR.

An extra-special congratulation for TEAM USA Women and Men who made us all proud representing the U.S. at the Trail World Championship in Spain this weekend. What a show of teamwork, grit, determination, and passion. Read more about their amazing performances here.