The season is officially underway!! So far I have raced 4 times (check out my “2015” page for more time, place, and location details) and have been pretty pleased overall with the results and progress. This year has felt very different from the start and racing has been no exception. I have been happy to feel more competitive, responsive, and confident going into and coming out of my competitions despite not yet running any P.B.’s. I have also felt more forgiving and patient with myself and am actually allowing myself to enjoy the process of a slow but steady uphill trajectory. I have my sights set on a long, healthy, FUN season and at this stage, I see greater value in focusing on things that build me up rather than tear me down.

A few weeks of steeple specific work coming off of our USATF event summit in Chula Vista at the end of March had me feeling a little antsy and excited to get a race under my belt. The first opportunity I had was right in my backyard at the Oregon Relays. It was fun to get to race the event for the first time with the support of old friends and also neat to be able to show some of the new friends who I’ve just met this year, what the steeplechase was all about. I had a loose plan to get faster by K’s throughout the race, but actually ended up doing just the opposite. None-the-less, Ian and I felt good about the effort. It was an unusually warm day and there was a bit of a breeze. I led from the gun and was on my own for pretty much the whole race.  It probably wasn’t my fastest season opener but it was not far off of where I have been the past few years and I felt smooth and strong.

There was a little anxiety going into the competition because of the changes that I have made in training this past year. I have been feeling positive and happy about things but I know that unless these good feelings actually translate to fitness and fast times, it doesn’t really matter. I want very badly to believe that they will but because the nature of my training is so different, nothing but actual racing will truly tell.

Four awesome pictures from the race can be found on my friend Phil’s website, Tracktownphoto.smugmug.com

A little speed work never hurts. It has literally been probably since my sophomore year in college that I have raced an 800 (about 7 years?!!!). Training this year has given me more confidence in my speed and running fast and I was excited to see what I could do. My main objective from the race however was to prepare myself for an upcoming 1500m at the Payton Jordan Invitational.  It is tough to get as good a quality effort in a workout as it is in a race, even if it is low key. This was a perfect opportunity- only a few miles down the road and against girls whose primary event on the community college team was the 800m.  I hoped to get a good start through 200m, settle in for 400m- expending as little energy as possible while not slowing down, and then bring it home the last 200m with everything I had left. Surprisingly, I found myself in the lead at 200 and unknowingly allowed myself to slow down too much through the next 200. With 350m to go, I already knew I had saved too much and started my end kick early. I was pleased with a win but would have really appreciated company the first lap to keep me honest. First time over that distance in a while, I walked away with good work in my legs but hungry for another go!

Thanks Romaine Soh for the great pictures! 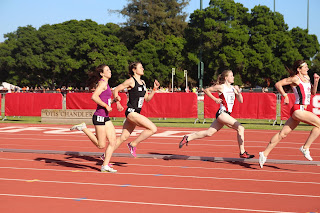 Since working with Rowland, I have grown to love getting a 1500m effort in my legs about a week before a big steeple. I try to keep it pretty low key in my mind, telling myself that it is a means to an end, not a primary focus in order to ease the nerves. I do like the challenge and always want to try to run my hardest. Many of my steeple competitors have significantly faster 1500m P.R.s than I do which motivates me to no end! With no real reason to believe I am in shape enough to get it, I set my sights on the ambitious goal of 4:10 (my P.R. is 4:12). Only hours before the race however, I thought better of that benchmark and decided to try to take the opportunity to race competitively and focus on place instead. I was in the 3rd heat and believed that I could contend for a win if I executed properly. I got out well, had a great position just on the outside of lane 1 and felt strong enough to cover a few moves throughout the race without expending unnecessary energy. I was second at the bell but had no extra gear as first crept farther away and a few others came from behind. Unlike other similar races, I did not feel that I backed down or faded back as much as I just didn’t have the gas to accelerate at all. Overall, I was thrilled to feel competitive and in control and know that that finishing strength will come. 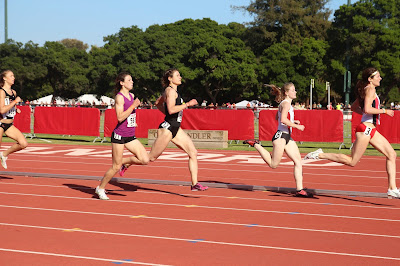 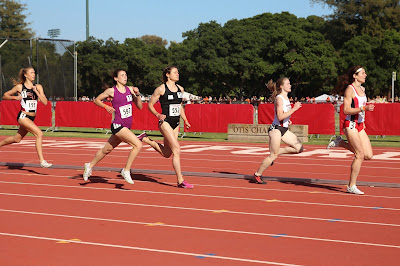 Hopping on the plane, I knew the name of my hotel and that I was about to run a steeplechase but that was about it. I had no idea what time my event was, who I would be running against, or anything about the rest of the meet.  I didn’t care too much however because I was just excited to be on the road again!! All the little details about competing over seas came rushing back from the last time I did it about two years ago. There are so many added factors you don’t usually have to think about that come into play. The meet ended up being heavily sprinter, jumper, and thrower focused (surprise, surprise in Jamaica) which made for a perfect introduction back for me. The women’s 3k Steeplechase was a field of five- 2 Americans, 1 Panama athlete, 1 from Puerto Rico, and 1 Jamaican. All but 1 I had raced against in the US in the past. I realized that I was the favorite on paper but I was nervous about the heat and breeze. I have not run especially well in humidity and hot temperatures in the last few years so I decided to run as conservative as possible for the first 2k and focus on competing the last K. At the time of the race, it was very warm but there was no breeze to worry about. Instead however, there was a hazy, smoke/smog lingering that had me a bit worried about my breathing. The water pit was way on the outside of the track so the race began only about 40 m from the finish line and the first barrier followed shortly after, making an interesting start. Lucky for me, one of the other girls took it out and led the pack. I sat on her outside shoulder and tried not to hang close but not too close. By the straight going into 3 laps to go, I was ready. I made a move and in my head heard my dads voice telling me, “don’t take the lead until you are ready to win”.  Yep, I was ready to win. I opened my stride and finished strong. Thanks to the girl that took it at the start, the time was faster than I anticipated but nothing to write home about. I was happy with the win and my little trophy of Jamaican art.

View all articles by Bridget Franek