from I’m Gonne Be…

Holy cow, it’s taken me over two weeks to write about the race!  One of the great things about being and training in New Zealand is I’m not sitting around bored a lot!  Maybe could also do with a bit more rest at times, but I love how I’m able to get in all my workouts and stay focused and still get out and do fun stuff.  But I digress….

One of the reasons I decided to come to NZ to train was to race in their Long Distance Champs and get in a nice training 50K race.  I never planned to race it all out because I wanted to make sure I could recover well and keep training.  The last thing I wanted was to have to take 2-3 weeks easy when I’m here to train.  And especially since I didn’t bounce back quite as fast after the 100 miler as I was hoping I wanted to be careful. 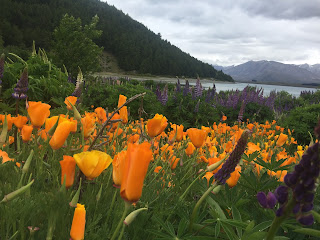 One of the coolest pictures I think I’ve taken. LakeTekapo

Training up to the 50K was solid.  I had some really great workouts and some solid workouts so I was really ready to see what I could do.  My plan was to be sub 4:45, that would’ve made me satisfied.  I planned to go out at 4:45 for 35K and then kick it in the last 15K.  But the best laid plans….

One thing that was really great about my easy week before the race was Tony had a work trip that I got to tag along with.  I was able to get in all my workouts but also see a large portion of the North Island and do some tourist things.  A lot of times when I have an easy week or a taper week I can get really edgy, almost depressed.  I’ve found out this is caused by the reduction in endorphins from not working out as much.  So when I’m home I really have to focus on doing lots of fun stuff and not just sitting around the house stewing.  This trip was perfect!  Always new things to see and fun things to do, including roasting marshmallows 🙂

I arrived in Timaru feeling good and ready.  The day before the race I went and checked out the course.  Probably one of the most picturesque courses I’ve been on, especially for a 1K loop.  It was an interesting shape with one hairpin turn and two turns sharper than 90 degrees.  There was also a section where there were some concrete dividers that were on the course that would make it challenging to go two wide, never mind three wide.  But since the field sizes for all the races were small it probably wouldn’t be an issue.  There were three entered in the 50K; myself, a guy named Miguel who has been living in NZ but doesn’t have residency, and Graeme Jones.  We all started at 7:00.  At 9:00 was the 5, 10 and 20K races, so an additional 6 athletes.

I was in Timaru for 5 days and the day of the race had the best weather of all of them.  I think the high was 50 and there was always a bit of cloud cover.  At one point it dripped for a few minutes but not enough to measure.  And there was no wind.  So absolutely great conditions.  The meet management was fantastic, I didn’t have to worry about a thing.  They were fantastic and rounded me up an aid station person (that ended up being a team) and they were fantastic.  I didn’t have to worry about a thing.  In fact one of the girls was so cute she made me laugh so many laps.  On my aid sheet I put that it’s easier to hold the bottle from the bottom so that I have lots of room to grab it as I go by.  She took that advice very seriously to heart and as I was coming would gently place the bottle on the palm of her hand.  She would concentrate really hard and get it balanced.  Once satisfied that it was balanced she would bring her other hand up and “present” it to me and look up with a huge smile.  It was the cutest thing ever!

As I said my plan was to go out at 4:45 pace, or 5:42 per K.  All three of us started off in a pack and things felt quite comfortable.  Unfortunately we came by the line and it was about 5:55.  Oops!  So I picked it up.  I overcompensated a bit though and came through the next K in 5:28, what would end up being my fastest K, but only by a second, so doesn’t really count.  Then I got into a nice groove of around 5:36.

Obviously that is faster than I had planned but I was feeling good and the course was good and I thought, what the heck.  I came through 25K in 2:20:16 feeling fantastic.  Each 5K had gotten slightly faster to that point.  Obviously that is 2:15 faster than the plan.  I was going to hold that pace until 35K and then try and pick it up.  But then I made my mistake.  Someone told me, hey, you’re looking great, see how much you can pick it up… or words to that effect.  I took a lap thinking, no, don’t do it, stick to what’s left of your plan.  But then I thought, eh, what the heck.  I was solidly in the lead and still feeling good.  So I continued to pick it up.  I basically did a kickdown until about 38K.  Then my body said, hmmmm, maybe that was faster than you wanted?  The next nine K were not the prettiest ones, but still not death marching or anything.

Also in that period something went wonky with my aid.  I’m not sure if I marked it wrong on my sheet or if my aid helpers jumped a few laps, but I’m pretty sure I took a GU much closer to the previous GU than I meant to.  I usually take a GU every 8K, except I’ll take one at 40 and maybe 46K (never made much sense to me to take one at 48K).  I found out that taking them closer than 8K early in the race is a bad idea.  My stomach started hurting really bad to the point I went about 5K without drinking anything.  It was a really good lesson to learn.  Oh, and the other thing that was a bit of bugger was I woke up and got my period about a week early (sorry guys).  That was a very unpleasant surprise and one I wasn’t fully prepared for.

Since I was never going to race this 50K all out when I started to slow down at 38K I didn’t push it.  But I did push the last 3K.  I was able to bring my last 3K splits down to 5:36, 5:43 and 5:30.  I was very happy with my final push and my ability to bring it back down.  I finished in 4:42:15.  So while I slowed down I only slowed 2 minutes, which I don’t think is too bad.  And…. I won the race!  As far as we know this is the first time a woman has won an open 50K National Championship.  Obviously Quentin wasn’t there (He was New Zealand’s Olympian in the 20K and 50K in Rio).  Had he been there he could’ve crushed me doing an easy day.  But to me it’s more what it represents and I’m very proud to add this to my list of accomplishments 🙂

My recovery from the race has gone simply amazing!  I couldn’t be happier with how I’ve recovered.  Monday I did a nice workout with a few people and had no aches or pains.  Tuesday I did a 10K, Wednesday I did a faster 10K on some hills feeling strong.  So I decided to really test the waters.  Thursday I did speed work.  I did a 3K, 2K, 1K workout getting ready for the upcoming weeks when I would bump it to a 5K, 4K, 3K, 2K, 1K.  It was cold, raining and windy.  But I did everything under 5 Per K pace!  Four days after a 50K! 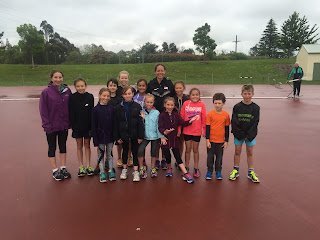 The Wednesday after the race I went to the South Canterbury track practice and had an awesome clinic with a group of very awesome kids!

Day of the race I felt a bit flat, but did a good warmup and figured I’d give it a go.  Laura Langley was racing and we were going to work together, with her following me the first bit as she sometimes goes out too hard.  The day was a bit warm and windy, but it’s a great track.

I started off bang on and went through the 1K perfect, so 4:35, the fastest I’ve done a full K in maybe a year and a half.  I hit the half way I think maybe a second down.  After that I honestly lost track but I ended up 13:56.72, which I’m pretty sure is my second fastest 3,000 time (my PB is 13:48).  I’m quite pleased with that less than two weeks after the 50k and after a hard week of training.  I got no cards and no paddles and was told my technique looked good.  It gives me hope that I’m getting stronger and faster!  Can’t wait to keep training hard here and see what I can do next!

Since I’m so late in getting this blog out, I’ll also include what I did today for my workout.  I did 6x4K/1K (so four K hard then 1K medium and do that six times with no break, 30K total).  It went great!  Each one got faster and I finished in my second fastest 30K ever!  And the course I did it on is not a fast course.  I’m tired, but feeling amazing.  Training is going so well.

And of course, remember if you want to help support me please consider doing your Christmas shopping through either my AthleteBiz store or my Flipgive store.  Both will give you good deals on your shopping and I’ll get a percentage back!  Thanks!

View all articles by Erin Taylor-Talcott