I’ve been telling myself for a year now that I needed to get back on the track and conquer some fears that I have developed. 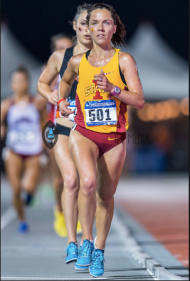 Throughout my 5th year of college, I became a very anxious racer on the track…I was trying to force fast times rather than enjoying the process and each of my final races in a Cyclone uniform.  The Big 12 Conference meet or relays were the only races in my final year of college that I just raced and focused on beating people rather than constantly pressing and trying to prove myself.  I left my final college track race with a bitter taste in my mouth–I had dreamed of being an All-American and as soon as that didn’t happen I made the decision that I was “retiring” from the track (or at least for the time being).

This past weekend I broke out the training flats (I know longer own spikes) and hopped in my first track race since I graduated college in May 2014.  It seemed like the perfect time–I’ve been back to training for about 6 weeks now and I’m preparing for my first big spring road race.  I knew that the meet would be a very low pressure situation and the field would be trying to run right at my current fitness level.

Despite a slow first mile, I was thrilled to run within 3 seconds of my goal time, come away with a win and have a blast racing again.  After a few days of reflection, there are 2 lessons I learned from getting back on the track–

My goal for the first part of 2017 is to build my mileage to 115-125 on a consistent basis.  Since my 4th year of college, I’ve been able to train at 100-110 mile/week but when I tried to increase the volume to 120 miles/week during my last marathon training segment, I really struggled and had to back down.  My four weeks of mileage lea 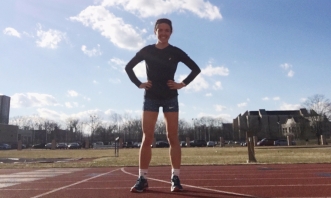 Going into Saturday, I was nervous because I knew that the pace would feel fast since I haven’t done any track specific workouts–I did a mile at 5:12 pace 5 days before the race and that was the fastest mile I’ve ran in months. However I also knew that if I could just grind at a slightly uncomfortable pace, my strength would carry me through; which is exactly what happened.  The first mile of the race was 5:13 (9:45 3k pace) which surprisingly felt easy and then I decided to “grind” the last 1400 and ended up running 9:33 (5:05 mile pace).

Competing on the roads brought me a new sense of confidence and freedom that I had lost on the track.   I was no longer anxious or pressing, I was able to ignore splits and instead let my body dictate moves in the race.  I have been blaming the track for my anxiety rather than my mentality and approach to the actual track race.

What I discovered this weekend is that the “freedom” can be found on the track when I just chill the F out and have a bit of confidence in my fitness and race plan.  It all comes down to how you approach the race mentally because at the end of the day, racing is racing whether you are on a xc course, the roads or a track.

Racing is the dessert after you finish eating your vegetables so enjoy it and make the most of the opportunity.

Post-race celebration during my cool down…did I forget to mention that it was 65 degrees in February this past weekend?!!

View all articles by Samantha Bluske