The first race in the 2016 LaSportiva Mountain Cup was the Marin Ultra Challenge 25k, hosted by Inside Trail Racing in Sausalito, California. The course tours the beautiful Marin Headlands with impressive views of Mt. Tamalpais and the Golden Gate Bridge. That’s what they say anyways. It was hard to see under my cap and hood with the rain blowing sideways and the wind knocking me around. However, race director, Tim Stahler, and his team of hard-core volunteers didn’t let the weather deter them from a top-notch event, simultaneously orchestrating a 50 miler, 50k and a 25k!

Tad and I got to Sausalito on Wednesday night so that we could run the course on Thursday and Friday. Because of the current blast of bad weather, Tim et al. had to revise the course into one small loop and one big loop, which allowed us to run the entire course. We started at Tennessee Valley on Thursday morning and the rain and wind was just ridiculous. We sat in the car as if in a carwash for a good 30 minutes just staring out the window hoping for a break. After taking the plunge, we ran the upper loop that had the climb up to Marincello. On Friday we parked at Rodeo Beach, the new start of the revised course, and ran the lower loop. The weather was equally bad if not worse, but we still were able to get the preview in without a problem. The trails are drastically different than what we have here in the Pacific Northwest. Very smooth service roads and paved asphalt made up 90% of the course. This was going to make for a very fast race! 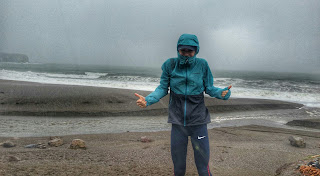 Soaked in a second. The La Sportiva Hail Jacket is awesome!

On race morning the weather was calmer than it had been the previous two days, but just as unpredictable. It would rain and then stop, rain and then stop. I changed my outfit around three times, still unsure when I lined up that what I chose would be appropriate. My bib number was put through the wringer and I hadn’t even started the race yet. 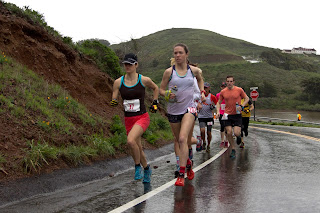 Start of the first climb. 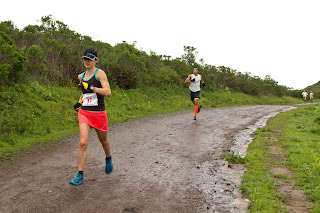 Switching to the downhill gear.

With $1,000 up for grabs and Marin County being an elite trail running hub, we knew there was going to be plenty of competition. I started the first two miles sitting behind a group of 4 women and then gradually pulled ahead at the top of the first climb, Hill 88. As the course wound around and started to descend quickly back to the start, I got passed by eventual winner Daniella Moreno, a former college cross country and track stud (16:33 5k and 34:27 10k) from UC Santa Barbara with a serious pair of wheels. I clicked off a 5:17 mile coming down the mountain and still couldn’t keep up with her! It wasn’t until the second climb that I came within a couple seconds, but I ran out of mountain and it was time to go flying back down. I had one more climb to make a move. I missed the second aid station check point after starting the climb and had to turn around and go back. By this time Daniella had extended the gap to 30 seconds and I knew that her speed would be unbeatable the final fast 4 miles. 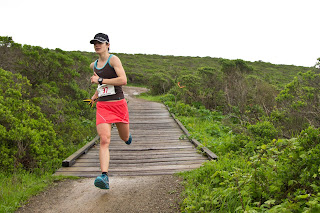 My face when Tad is telling me to run faster.

Once I crested the top of the final climb I turned my legs over as fast as they could, but when the trail bottomed out with 2 miles to go, I had a hard time keeping the momentum going. My hip tightened up significantly to the point that I stopped to stretch twice to see if my stride would loosen up. By this point Daniella was long gone and I knew that I had second. Even when your race position is set, it is so important to push hard all the way to the finish because you never know what is happening out in front of you. This is very hard to do especially when you are not winning and do not have the adrenaline to mask the fatigue. This is something that I have taken note of and need to work on for the future.

On the final turn into the finish shoot I embarrassingly ran into the ‘Turn Right’ sign and smacked my shoulder and head. I was glad to be done. I finished 2nd woman, 11th overall with a finish time of 1:48:35. Full results here. 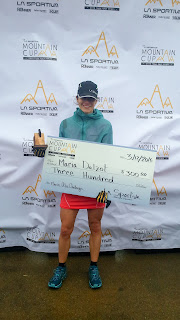 Who doesn’t love a big check?

The trail running community in Mill Valley is very special. Large organized group runs, extremely supportive cheers along the course and volunteers that made the race go off without a hitch despite the inclement weather. I really want to thank Tim and his crew for all of the work they do and continue to do to host the best races in California. For more Inside Trail races check out their Facebook page and website.

Thanks to La Sportiva for providing opportunities for trail runners to make some cash while doing what we love to do in some of the most spectacular areas around the country.

A huge hug and thank you to La Sportiva Team and Mountain Cup Manager, Quinn Carrasco, for bringing my gear all the way to California with him, for giving me his jacket at the finish line as I shivered in wait for Tad to come off the mountain and for his support and enthusiasm.

Next weekend is the famous Chuckanut 50k here in Bellingham, Washington. I am really excited to see my Trail Butter Family and to cheer on my friends as they take on the Ridge, Chinscraper and the dreaded Interurban. Maybe next year I’ll be on that starting line, too…

Check out Maria’s store! Any purchase supports her journey!