from The Turtle Path

Well, I said half marathon phase was over and ultra-phase had begun and what better way to kick it off than with an ultra!

Nowadays, there are big ultras every month and the two loop mud-fest at Hagg Lake has been relegated to “small local ultra” status, but back in pre-Ultramarathon Man days, Hagg Lake was pretty much the only thing on the Pacific Northwest Ultra calendar this time of year. In its 15 year history many top name ultra runners have kicked off their season at Hagg including Kami Semick, Joelle Vaught, Ashley Nordell, Cassie Scallon, Krissy Moehl, Devon Yanko, Denise Bourassa, Darla Askew, and for the men guys like Hal Koerner, Karl Meltzer, Max King, Jeff Browning, Ty Draney, Rod Bien, Ryan Bak, William Emerson, Jacob Puzey and Sean Meissner. With a history as a season starter like that and a location less than 90 minutes away, it was hard not to choose Hagg as a kick off for my (hopeful) comeback to ultra running. Plus, I have four Hagg Lake finishes of my own (my first goes way back to the 25k in 2002!) and five finishes gets you into The Hall of Mud, and who could resist that?? (you maybe haven’t heard of it, but I assure you, it is very prestigious. Very.)

I took a very easy week between the Roaring Run Half marathon, mostly doing little three milers on my treadmill at a pace that I am embarrassed to post on my Strava (and usually don’t!). But I assure you that 12+ minute pace is very deliberate (and even way slower than MAF) to allow recovery and “flushing the system” without adding any running stress or fatigue (I have to do these on the TM to run that slow, but I actually enjoy it – makes me feel like I could go forever!). I ended Roaring Run with a pain in my right hamstring and right foot, but the right foot pain was mostly gone the next day and the hamstring pain got diagnosed as piriformis/sciatic pain and stretching (esp. pretzel stretch) seemed to be helping so I didn’t think it would be too big a deal. I had done five 20+ mile runs since Jan. 1, and while 13 weeks can’t substitute for years of continuous training, I was feeling pretty good about my fitness for a 50k. What should have worried me was the fact that none of those runs were on technical trail. 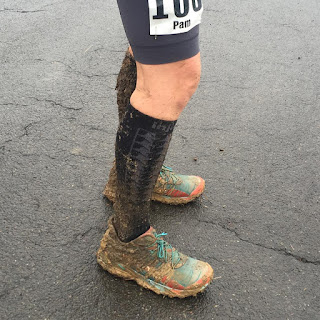 Did I mention the mud?

Now Hagg Lake is not a technical trail, nor is it particularly hilly with 3,370′ feet of total gain, but the issue at Hagg is the name sake mud. Hagg runs very differently on dry versus wet years, and this was a VERY wet year, especially after six straight hours of rain the night before. The dirt becomes a thick layer of sticky clay and it only gets worse the second loop after everyone has churned it all up the first time around. My La Sportiva Mutants did great in the mud, but so much force is needed to push off your toes to propel you forward and not having done any training for this, my feet were weak. By the end of the first lap, my arches were hurting badly! Hips and quads also had something to say, but only just typical minor whines.

The dam on the lake before the five mile AS is usually a nice little break from the trail, but by the second loop, I was in agony. I pretty much ran duck foot the final nine miles with several shouted “Ow!’s” (but no cuss words!). Fortunately, I had a lead and was able to keep it to pick up my third Hagg win, but at that point, there would have been no racing from me if anyone had passed. I was so glad to finish, but then the pain only got worse. I have never been so anti-social after a race! I made it to my car where I finally got my shoe off but could not take off my socks because of the pain when contorting my foot. I thought I’d walk the 100 yards to the food, but I almost fell over on my second step because I couldn’t  put pressure on my foot. I got in my car and drove away and twice screamed in pain while driving (who needs to brake??).

My overall time was pretty slow compared to my other times, but I think this was the muddiest I have seen the course and the times across the board were slow. The men’s winning time was 4:16 as compared to a 3:24 course record and winner Zach Gingerich is not a slow guy! Even the top ten master’s times for men are all under 4 hours, which again just speaks to how slow it was this year. That being said, I know I didn’t run the second lap very well, but I don’t feel like it was due to bad pacing or fitness and my fueling was good, so overall, I am happy with the race. I am not, however, happy about my feet! I have a newfound sympathy for plantar fasciitis sufferers and I must admit, I probably didn’t have a lot before. I have run through so many different “niggles” that I kind of thought people must be exaggerating with PF, but it is no joke! I hope WebMD has some pointers for me (hahaha- as if!). I am 3 for 4 in races (plus a master’s win) since December after getting diagnosed and medicated for asthma, and while winning isn’t really that important, especially in these smaller races, it is just nice to feel like I am getting back in the game. I don’t want to have another set back! (yes, that is my whiny baby voice!). Anybody got any good PF advice?? 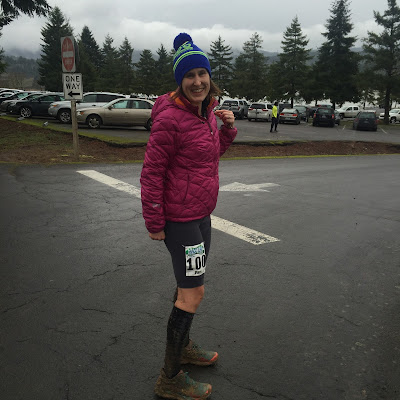 Happy to be done! Also happy my car is the closest one! 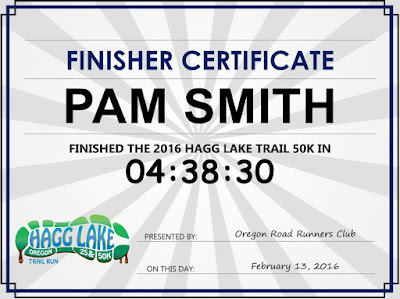 View all articles by Pam Smith