from Pickle on the Run

At the Sacramento Olympic Trials post-marathon after-party at the City Tavern in Los Angeles, I made a confession.  Originally a stranger I had admired in the running world, and now a dear friend, Kaitlin Gregg took my confession.  I admitted to her that almost a year ago I had read one of her blog posts.  In her blog, I read a quote that resonated with me.  I decided to copy her words and paste them into a post-it note on my computer desktop that I would see every day.  Kaitlin wrote “Running joyfully is my mantra – I believe that you can reach your potential when you run with gratitude and full of happiness.”  Her words are not particularly revolutionary or advanced, but they are simple and authentic.  Although I saved that quote long ago, I think now more than ever, I understand what Kaitlin is saying.  The past month has revealed these words to me in profound ways. 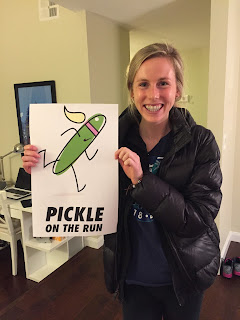 Logo designed by Reba Brammer and photograph by Andrea Corradini

In my five week marathon preparation, I struggled with fueling.  My sensitive stomach rejected every Gu, gel, or chew I tried to force down.  I approached race day not fully confident in my fueling abilities, but I knew I had a much more powerful source of fuel.  I was fueled by love.  I was fueled by the love from the coworker who never hesitated to jump in on my twenty-two mile long run on his lunch break.  I was fueled by the love from the woman who dedicated her Saturday morning to biking alongside me and two other women providing us water bottles, gels, and encouragement.  I was fueled by the Facebook messages and text messages from people expressing how proud and inspired they were by me.  I was fueled by generosity of the Oiselle woman who offered her water to me when I couldn’t make it to the next fuel station at the trials.  All of these moments and all of these people are the reasons I get to run and I get to run joyfully.

It may be surprising, but even though I finished far from my time goal and was forced to walk a handful of times due to dehydration, I loved the experience.  I knew going into the race that the marathon would be nothing like the half marathon.  It’s one thing to expect it, but it’s another thing to live it.  The marathon IS a whole beast of its own.  The marathon is not just a reflection of who you are as a runner; the marathon is a reflection of who you are as a person…and that is why I refused to quit.  Now, don’t get me wrong, I definitely considered dropping out and I fully understand why over 25% of the women dropped out.  I fully respect these decisions.  However, for me, I could keep moving.  It wasn’t pretty and it wasn’t fast, but I could keep going, so I had to keep going.  When my body shut down and forced me to stop, walk, and regroup, the fans rallied and roared in cheer when I mustered up a stride.  I am thankful for all of the support and encouragement by those standing for hours in the hot LA heat, those hovering over their NBC Sports app tracking my splits, and those who have helped me get to line up with America’s best marathoners. 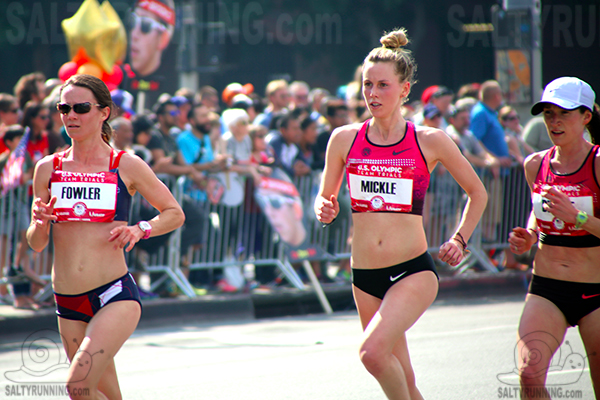 Now, as my mom frequently reminds me, “Hold on to those feelings, Liv!”  Mom, I’m holding on.  As always, thank you to my family, friends, coach, and teammates who helped me reach one of the many significant stepping stones in my running career.  And like my Dad chants, Pickle is still on the run!

Check out Olivia’s Store! Any purchase supports her journey!

View all articles by Olivia Mickle