I have to admit I may have found the most irrational fear imaginable.  Over the last few days I noticed an anxious feeling I couldn’t quite place.  After some careful examination, I realized I was afraid of getting better.  How could that possibly be?  It makes no sense at all.  For the life of me I can’t figure out where the fear is materializing from.  Why would I not want to get better?  That’s all I’ve wanted for the last 3 months specifically (and last 9 years more realistically).  Sitting inside, feeling like dog shit all winter and watching my friends kill race after race really made me miss my sport and my life. 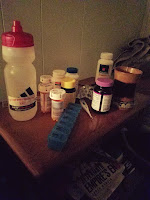 Tired of the pill life

It’s been 6 weeks since my 4th final Rituxan infusion, a month since my follow up visit that turned out to be a failure, and 3 weeks since my last Emergency Room visit.  My body has physically been a wreck since December.  My body has literally been fighting itself for 5 months now and I’m tired of it.  After a Vasculitis patient starts treatment rounds it is just a waiting game.  You take some drugs, get some test, adjust some drugs, and then you either get better or worse.  Well over the last 6 weeks I’ve gotten better and worse but I may have finally started to see some small signs of some physical improvements.  Of course in my screwed up brain I’m worried that they are fake.  Which I guess is a better fear that every Vasculitis patient has, that you will never find remission again, which I was battling up until a week ago.

Where and why is this fear metastasizing?  Have I gotten so used to being sick over the last 9 years and feeling bad that I don’t want to feel good?  That can’t be it right?  I’ve felt trapped and closed off from the world the last several months.  Nothing is worse than the brain energy to want to do something but having no physical energy to do it.  So that can’t be it right?  I’d like to be able to enjoy myself again, go out with some friends, have a drink and not worry about whether my body was killing me if I did. 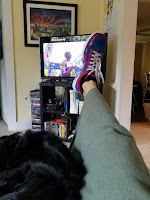 I’ve suffered through so many aches, pains, infusions, drugs, etc… all while just wishing I could step out my door and run free.  Exercising has been a complete drag, when you know that you are going to half to fight hard every single day for every minute you are out there.  It’s like gearing up for a race effort each and everyday just to get out the door.  Now at the slightest signs of starting to possibly see some signs of improvement, I get scared?  What the hell?  Aren’t supposed to be super tough and ready to be healthy so I can get my active lifestyle back?  I’m a man right?  I don’t get scared! I can’t get stage fright before I even get ready to go on stage.

I’ve learned what to give my energy to now.  I’ve learned which thoughts need to be feed, which need to be ignored, and which need to be acknowledged and chewed up and spit out.  This fear of health can’t be feed and I know that now.  A younger more immature me would’ve gotten stuck in the trap of this fear.  Learning to work through these mental hurdles is one of the biggest differences in how I have handled my Vasculitis over the past 9 years.  I was young and dumb at 21.  And 25 and 26 was just old enough and bitter enough to get lost mentally.  Now through lots of trials, errors, conversations, books, and self exploration, I’ve gotten myself on stable ground.  That’s not to say that I still can’t lose my footing.  I’m one wrong step away from getting stuck in a trap, but I’m much more careful with where I walk and I feel more secure with each safe step along the way.  But with all the mental stuff aligned, it allows me to be more objective about my physical condition.  While I am not out of the woods yet, it has to mean something that my mind is being allowed to worry that I a small sign of getting better might be fake.  If you believe in the power of the mind/body connection, the thought that my body would be experiencing something that would allow my mind to think this, should say a lot for my new direction.