I was hoping to keep an up-to-date account of my European trip, but I broke my laptop about a week into the trip.  I managed to post my second and third posts from borrowed computers, but now I’m playing catch up.  I also had trouble adding pictures to my second and third Euro blogs, so check them out.

I flew from Manchester to Copenhagen, where I had an eight hour layover before I flew to Helsinki. During the eight hours I left the airport to get a run in.  I took the subway a couple stops out to what had looked like a giant park on the map.  It was more like a business area with a lot of green space, but I found some brush to hide my backpack in and got my run in.  All was successful – I got my run in, my stuff wasn’t stolen, and I got to pet a pug mid-run.
I must have looked slightly Danish because people kept asking me how to use the metro.  One young man looked and smelled like my brother (I.e tall, shaggy, and smelly), and was on a European hitchhiking trip, something Dylan would do.
When I arrived in Helsinki I got a shuttle to a nearby airport for the night. 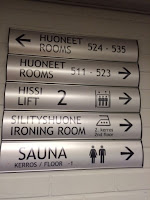 In the morning I took the bus from the Helsinki airport (which is actually about a half hour outside the city) to the central station to meet my dad. My dad did a great job planning out the remaining part of the trip, and he has a daily itinerary saved on his phone.  We were supposed to meet at a fast good restaurant called Sybilla at 10:45 in order to make the 11:12 train to Kuopio.  I arrived about an hour early, and spent the first half an hour looking around the station for this restaurant.  I asked an information person, who kindly looked it up on his phone.  The map showed the restaurant as being in the main room, but it was not there.  Thankfully, both my dad and I decided to go to Burger King instead, since it was the closest place in existence to where Sybilla was supposed to be.
We rode the train five hours to Kuopio, the closest city to Lapinlahti, where I race in a couple days.  I love the landscape – endless forests and even more lakes than Minnesota.
We checked into a hotel and set out to explore.  There wasn;t much going on.  We saw a lot of Soviet-style buildings and a paucity of the people who must live in them, even though it’s Friday evening.  The main square is just about empty, although s few people sip beers on a restaurant lined street just off the square.  We pick the most crowded restaurant, and I order a liver burger to get a good dose of iron and see if the Finns have a trick to make liver more palatable.

Dad dropped me off in Lapinlahti and continued by train to check out the next small city.  I was collected by Heli, who was one of the meet organizers.  We drove the mile across town to a private Christian school that was converted to room rentals in the summer.  I shared a room with Kim Hansen, a javelin thrower and a common space with steeples Addy Bracy, Maggie Callahan, Rachel Johnson, and hurdler Sirena Alise. 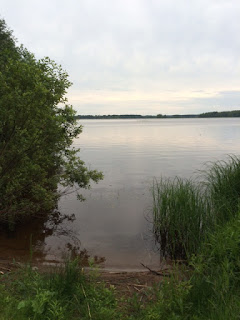 Lake next to our housing

I felt like I was at summer camp. We ate three cafeteria meals a day in the school gymnasium.  Breakfast always included deli meat and cheese, hard boiled eggs and porridge.  Lunch and dinner usually had some combination of salad, pasta, fish, and meatballs. 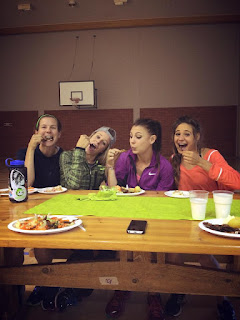 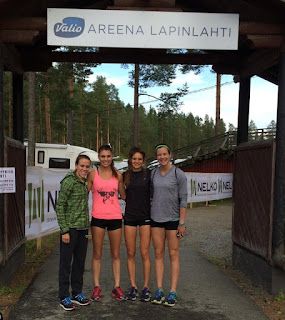 Steeplechasers in the 1500m

After the meet the Americans, some Finns, and a couple others decided to hang out and drink some beer.  Liquor sales had already shut down at 9pm, but sprinter Joe Morris asked the meet organizers if there was a different way to obtain alcohol.  There was rumors of a son of someone having some beer to sell.  We went inside to sing 80s karaoke, and when we were done, a car full of early 20s young men pulled up.  “We are gangsters. Don’t mess with us,” they told Joe.  We all had a hard time these young men seriously, but Joe bought some beer from their trunk, and we went inside to play some card games. 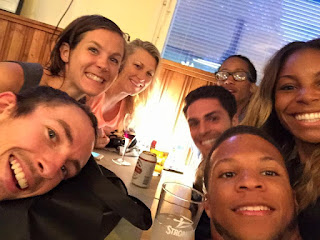 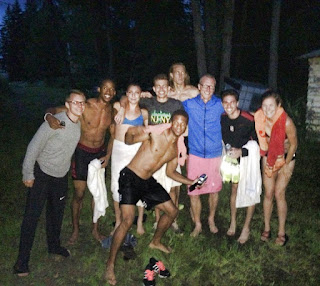 We eventually ended up jumping in the lake

Most athletes who ran at Lapinlahti are also going to run in Joesnuu on the 24th, so the meets paid to keep us housed and feed in Lapinlahti were it was probably less expensive than a city.  Summer camp continued with runs on dirt roads and lounging around with fellow athletes.  The most stressful action I had to take was figuring out how to work the Finnish washing machine (there was a knob separate from the machine which controlled the water).
The meet organizers kept us entertained each evening.  One evening we roasted marshmallows and hot dogs in a small hut, which was especially fun since the Japanese athletes had never roasted food over a fire before and kept dropping pieces into the flames. 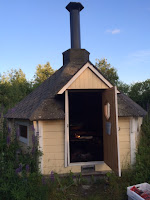 Just the cutest hut with a fire pit inside 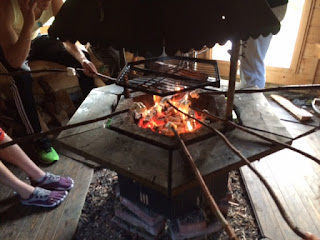 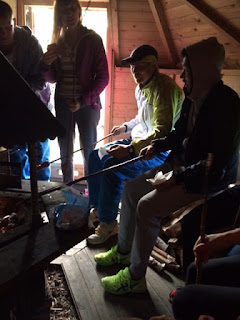 Another evening we got to go to the local Strawberry and Cheese festival.  The festival included a stair-climbing contest and a safety-boot kicking contest.  The athletes excelled at the stair-climbing contest, and a Ukranian 400m runner set the festival record.  But the Finns showed most of us up in the boot-kicking contest.  We had to kick a rubber blog off our non-dominate foot.  While many of the athletes kicked the clogs straight up in the air, out of bounds, or, sometimes, in bounds but not very far, the Finns walked up to the line and with no issue, kicked the shoes super far.  Apparently boot-kicking is somewhat of a national sport, and they had the technique down. 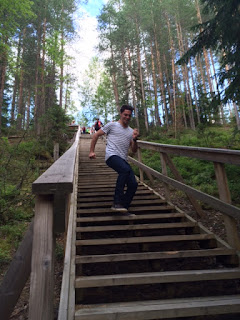 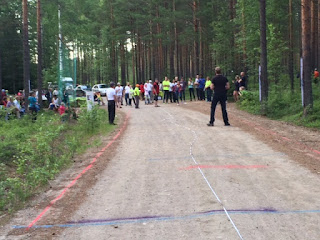 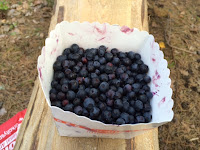 I got to forage for wild blueberries – Yum! 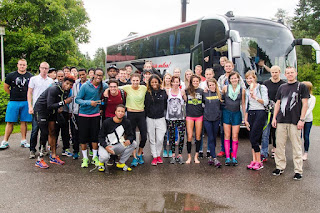 Boarding the bus for Joesnuu

I had high hopes for my last steeple of the season.  Unfortunately I felt sluggish from the start.  I bought heel cups because my plantar in my left foot had been really tight since the Letterkenny steeple.  Each water jump hurt my foot and the buoyancy I felt in my other European races was gone.  I struggled to a third place finish behind Rachel Johnson and Victoria Mitchell.    I did have fun watching para-athlete Richard Brown break his 100m pr twice, thus setting the world record.
After racing the meet organizers took us to the only sports bar in town, which was showing our meet on the big screen! 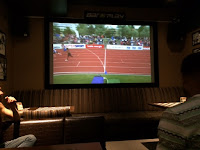 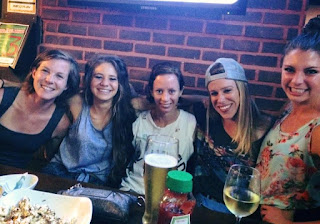 I walked through an art museum, enjoyed the first cup of good coffee I’d had in days, and met my dad to take the train to Helsinki.
I had a low key day between traveling, taking the day off running, and going to bed early.

Dad and I wandered around Helsinki.  Our main stop was at the modern art museum, where we were lucky to catch a tour in English.  The tour guide asked us where we wanted to start and two guys in the group immediately asked to start with the Mapplethorpe exhibit.  I hadn’t seen Mapplethorpe’s work before, but I wasn’t particularly excited to look at photographs with my dad from an artist who was controversial for S and M and objectification and exploitation of race in his pictures of naked men.  I ended up really liking the exhibit, except for two photographs where I felt like I was being flashed.  In the two photographs the heads were cut out of the frame, and the bodies were fully clothed except for their penis’ hanging out.  The tour guide did a great job explaining the critiques of Mapplethorpe’s work and his reasons for choosing his subjects.  For the most part, I thought it was a really cool to see his definition of beauty to include black men and and muscular women. 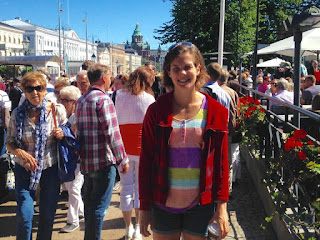 In the evening, when we boarded a cruise ship.  I had never been on a cruise ship before, but it was a great way to travel to Stockholm.  We got to eat a gourmet seven course meal, while watching the ship pull away from Helsinki, then slept through the night for most of the travel.
Join The Conversation