Of the last 24 hours, I have been flying for 15, traveling by car, bus and train for another 3, and I’ve been waiting to travel for 6.  It’s been a long day, but I finally arrived in Cardiff, Wale in the evening.  I went for a quick run along the Taff River.  I’m surprised how similar the climate feels to Seattle.  On my run, I see all the same flora and fauna I see in the Pacific Northwest, even the Oregon Grape bush.
I’m staying at an Airbnb with a Malaysian family near the city center.  The neighborhood is predominately Muslim but there are a lot of Chinese owned businesses.  The houses are built sharing their adjoining wall, so there is a straight row of concrete down the block.  We are half a mile away from the huge Bute Park, but it’s strange imagining a childhood without exploring among the flowers and bushes in a yard.

I tried to get on the track for a morning workout, but I failed.  I tried one stadium, then I tried a high school, and finally found a third track open to the public, but a kids meet was in progress.  Loosing access to reliable facilities is one compromise of heading to Europe.
After running, I went the Cardiff castle.  As soon as I got inside the castle, it started pouring. After waiting inside for a couple minutes, I got bored, and braved the elements.  As I climbed out of one of the topmost rooms, a bat tried to fly in, and bounced off my chest full force. 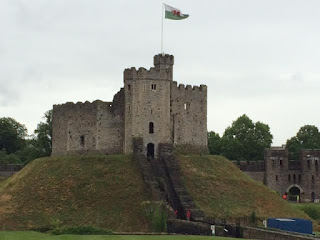 “The Mound” inside Cardiff Castle

My favorite room was the library with animals carved into the bookshelves. 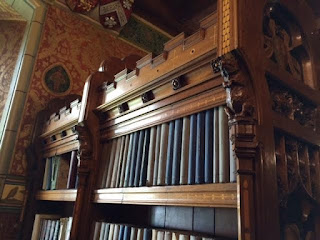 Next I visited the Cardiff Nation al Museum, which housed both natural history and art exhibits.  My favorite peice was the first known painting of a Welshman holding a leek.  According to the museum, the Sovereign and courtiers wore leeks on St. David’s day.  James I commented, “the wearing of leeks by Welshmen was a good and commendable fashion. 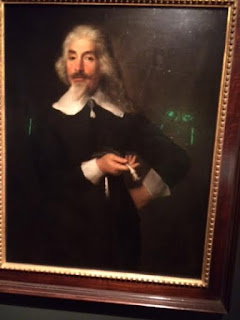 I tried the track again in the evening, and was successful getting in. I was impressed with the array of people already practicing on the track.  A couple high school studentspracticed water jumps with two coaches while a masters runner practiced his hurdle form and another masters runner did a long interval workout under the guidance of another coach.  As I finished up my workout, about 70 middle school students came out with their coaches to start practice.  I wish we had as many enthusiastic runners in the US.

I didn’t set an alarm clock and sleep in until 2 pm, making a total of 15 hours of sleep for the night.  Oh my goodness, what a mistake.  I was planning on taking the train to Swansea for the day, but instead, I run and then walk over to Cardiff Bay.  According to the guidebooks, the city has done a remarkable job of turning the bay around.  What used to be a run-down, seedy shoreline has been transformed.  I was most looking forward to seeing the Roald Dahl Plass because he is one of my favorite childhood authors.  While the walk along River Taff was pleasant, the Mermaid Quay area was just like any other outdoor shopping mall and restaurant area.  The shops were shiny, but boring.  I got some coffee, read a book, and watched a Wales family eat a deep-fat fried American dinner next door. The Roald Dahl Plass was also disappointing.  All it was an irregularly shaped basin now used as a public space.  Tents were being set up for an event.  I couldn’t even find a statue or a plaque talking about Dahl or his books.  Someone should be sent to The Chokey.

After a melatonin-induced few hours of sleep, I woke up to my alarm, ran, and got onto the train to Swansea, a small town about an hour away.  I saw the Swansea castle, the Dylan Thomas Museum, the Swansea Museum, and the National Waterfront Museum. 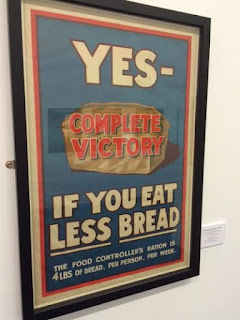 My Favorite WWII poster on display at Swansea Museum 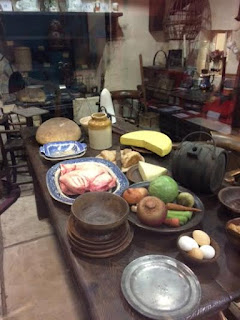 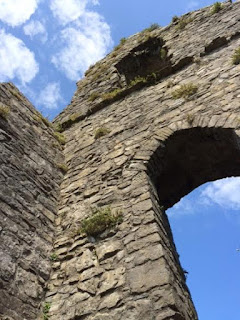 After seeing Swansea, I took the bus to Mumbles, the first town of the Gower region, along the sea.  I explored the well-preserved Oystermouth castle.

At the end of the day I bused back to Swansea and trained back to Cardiff.  As I walked home from the train station, I took a detour back the monstrous Millenium stadium used for rugby.  On the sidewalk outside the stadium, an artist had created a mosaic square for each country that must participate in Rugby.  Most county’s squares featured some combination of plants, food, clothing and animals.  The United States square had a car, a dollar sign, Mickey Mouse, baseball, a teepee, and a hamburger. Happy 4th.

I have one last run through Bute Park and along River Taff before getting on the train to the bus to the airplane that will bring me to Cork,  Ireland.
Join The Conversation