from Aspirations of a BA Steeplechaser

In the couple days before the Gothenburg race, I got to spend some quality time with running buddies Amber Shultz (Club Northwest Steeplechaser), Sasha Gollish (Haute Volee Canadian Mid-distance), and Victoria Mitchell (Australian Steeplchaser).  With quite a bit of down time in the couple of days leading up to the race, and not having close family or friends around, I appreciated having awesome women to hang out with. 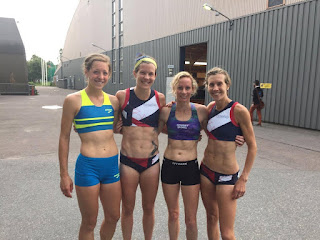 Track officials never seem to disqualify athletes for breaking rules.  Runners blatantly shove, drift over to prevent people from passing, slow races down to let their teammate catch up, and cut others off.  Maybe a yellow flag will be raised, but almost never is anyone disqualified.  So, I was very much surprised that when officials started to get annoyed with some of the women’s conduct in the staging area, they had tools to get racers in line.

We were all supposed to be lined up and ready to go out to the track, but one of the women was still changing into her uniform, holding the rest of us up from being able to continue warming up before racing.  One of the officials walked over (once the runner had her buns on), and pulled out a yellow card as a warning, soccer style.  I was thankful an official was willing to defend the rules, first, because it was hilarious to see a card being thrown outside of a soccer stadium, but also because if you have an 8:40 3k pr, you have run in an international race before, and you know how things work.  I know I’m my dad’s daughter when I’m that excited about officials enforcing law and order.

The race itself was fine.  I went through 1600m in 4:50, but then slowed down to 5:00 pace, finishing in 9:11.  The time was a one second PR, but it hurt, and I didn’t have anyone to race against after I lost contact with the top five after the first two laps. Right after the race, I was questioning if I should pull out of my remaining three races, because I felt so bad.  But, with a little distance, I’ve remembered how terrible I usually feel when I race a couple days after traveling a long distance. 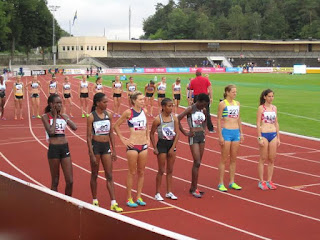 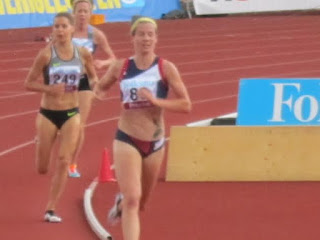 Pain face.  Maybe if I close my eyes, the hurting will stop?

Now I’m staying with Amber and her husband, Jedd, in an Airbnb for a few days before heading to London.  We are using the time to rest, read, and cook.  Michael is chiding me for not taking full advantage of being in Gothenburg, but I have a lot of racing to do in the next couple weeks, and I know I’ll be on the go once Dad gets here to travel with me in Eastern Europe.