Whoa-weee. What a crazy week in Eugene, Oregon at the USA Track and Field Championships. Last time I stepped on Hayward Field was 2012. I missed the Olympic Team by .22. Now, here I am reflecting on a World Championship team that I missed by .04. Two Team USA misses by .26 seconds total.  hmm. As my husband says, “TUUUUFF.” (The drawn out “U’s” are referring to the slow way in which is says “tough.”) What can I really say right now? Well, I have perfect word to say but I won’t repeat it on paper. So I’ll just say, this really sucks!

Reed and I rented this adorable art-inspired 2-story loft in Eugene for the week, to have a little more space, and to avoid having to eat out every single meal. Sitting in a hotel room staring at the same TV, and out the same window all day for a long, stressful week can sometimes make your head want to pop off. So the loft was a great idea, and it was away from the stress of the track meet and all the noise of the stadium. Poor Reed…this is the second USA Championships he has traveled with me, and he gets to deal with my passive-extremely-aggressive personality the entire week. Three rounds of 800 meters with arguably 5 of the fastest 10 girls in the world fighting for 3 spots. Let’s just say he is a saint. And I THINK he still wants to be married… HA HA JK. My legs felt miserable in the first round…which I attribute to doing next to nothing on the track for the week leading up to the meet. I was able to win my heat and move on to prelims. The next day, my legs turned around and I felt great, winning my prelims race to qualify me to finals on Sunday. Saturday we had a day off to recoup, and I took a two hour nap, did a little shake out, ate a lot, and watched episodes of “The Killing.” (Our new favorite Netflix show). I did manage to get out of the house Saturday evening for dinner. We went to a beautiful winery about 20 miles from Eugene called Kings Estate. 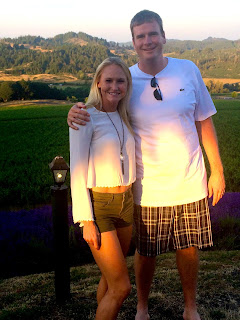 It ended up being a perfect distraction with Reed’s family and a few family friends that made the trip to Oregon.  I may have been the only person to ever go to Kings Estate without trying a drop of their wine.

Time flew by as I woke up in a sweat Sunday morning. I had a calmness about me that I hadn’t had before. Maybe it was a confident feeling, but I couldn’t put my finger on what it was. Here I was on the starting line, in lane 4 for the biggest race of my season, and for the first time maybe ever, I felt ready. Ready in every since of the word. Mentally, physically, emotionally ready. My coach had given me a race plan and I had no doubt it was going to work, and for 600 meters, it was working perfectly. I was ready to go for it, and as I felt myself getting ready to make my move, I felt a total momentum switch and I realized my foot wasn’t touching the ground. I had gotten caught up in someone’s legs and I was about to fall. I managed to keep my balance but lost my stride pattern that I had worked so hard to maintain. In an instant, I was in the back of the pack. I didn’t give up…I rallied the last hundred meters with all my strength and was .04 from getting that third spot to Beijing for the World Championships later this summer.

You can watch it here.

Not gunna lie, I felt totally robbed. I really believed it was my time to make Team USA. Don’t get me wrong, Alysia, Brenda, and Ajee without a doubt deserved to be on the team, but I did too. And so did the entire field of finalists. I marched off the track in frustration, getting hounded by the US Anti-Doping Agent (my drug tester), who followed me around the next 30 minutes while I cried in my husbands arms, bawled to my agent, and called my Dad in hysterics. It feels so unfair that something I put hours, weeks, and months of work into can be taken away in one race that lasts 2 minutes. I know there is more to a season than the championships, but that’s the most important one, and why do I keep failing? I started questioning myself. Was all this worth it? It took me months of mental rehabilitation after my dramatic miss of the Olympic Team in 2012 to have the courage to step on the line and put myself in the situation again. And it just happened…again. And I’m supposed to get up, wipe my tears, and do it…again? Do I have the courage to put myself out there for another chance of missing an olympic team…again? The answer, I decided, after eating chicken wings and a couple beers, was yes. Reed, my savior, always puts things into perspective for me. He reminds me that everything happens for a reason, and the best things in my life are still yet to come. If I never make an Olympic Team or a World Championship team in my career, I will always be happy in the end. I have the best husband, and the best family and friends I could ever imagine, and those things will never be lost. I always put SO much pressure on myself, I always have, which Reed says is why I have gone from a measly college soccer player to a professional track and field athlete. I have always wanted more from myself, which is why it is hard for me to feel proud of any of my accomplishments. I hope after this track and field thing is all over, I can look back and be like “hey, I’m proud of myself.” Until then, I have resorted to continuing to force the limit of what is comfortable and be a fearless competitor on the track. I’m not giving up…maybe the third time will be a charm.

I am off tomorrow to Paris, France for the Diamond League race where I will run the 800 on Saturday. I have a packed schedule in Europe for the entire month of July, and will return to the US in early August.

View all articles by Molly Beckwith-Ludlow